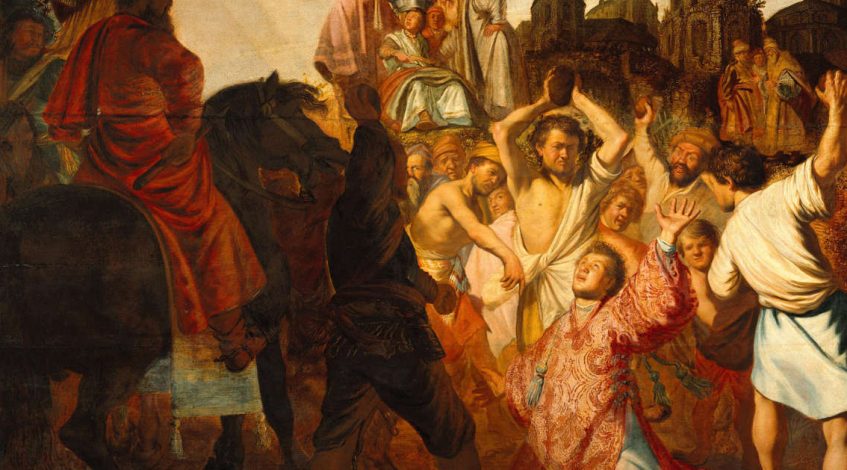 “Call no one on earth your father; you have but one Father in heaven” (Matthew 23:9).

Throughout history, including that time since the days when Jesus uttered these words, we have referred to others on earth as father. This title is used in different contexts. For example:

OKAY, BUT HOW CAN THIS BE?

Since Jesus did say what He said, are we not disobeying Him when we continue to use this term?

I don’t think many Christians, at any time in the history of the Church, have objected to calling one’s biological male parent as father. Do you object? Have any of you ever said, “Sorry, uh… my male parent, Jesus does not permit me to call you father.” No, of course we do not say this. If we agree on this, then we must conclude that the passage is not meant to be taken literally. Yes, we begin with the literal sense of what was said, but then we move to a deeper meaning.

Something else is meant. It is the place of those who have authority from God to determine, if possible, what Jesus meant. The Church has performed this task and it is clear that she does not believe that Jesus meant to restrict the use of father to God alone with no other possible use. We are taught to call our priests, fathers. So, to faith we seek to add understanding.

WHY ASK THE QUESTIONS?

Two reasons… the first I have already stated: faith seeks understanding; and the second: some non-Catholic Christians try to use these words of Christ to demonstrate that the Catholic Church is not of Christ. We need to be prepared to answer these objections.

I want to draw your attention to two other verses from this same paragraph:

Taken literally, we are not to call others teacher or master, but those who teach are often called teacher, men are often referred to as mister (from master) and women are often called Miss or Mrs. (from mistress). We also use the term doctor all the time; yet this too means teacher.

Well, you see where this is going; to the same place that father went. So why do some object to the term father when applied to a Catholic priest, but not to teacher or doctor, both of which are also used in a religious/spiritual sense by Catholics and non-Catholics alike… or master, for that matter?

The answer, I believe, might be that the use of father by Catholics is a highly visible indication, in their minds, that the Catholic Church is at odds with the teaching of Christ.

DOES THE NEW TESTAMENT PROVIDE EVIDENCE IN SUPPORT OF THE CATHOLIC PRACTICE?

The most readily helpful evidence to support the Church’s teaching comes from the New Testament. Can we find instances where the authors of the New Testament books, writing under the inspiration of the Holy Spirit, used terms that express this father-child relationship in matters pertaining to our relationships in the faith? The answer is, “Yes.”

The Example of St. Stephen

Let’s begin with St. Stephen, the first martyr of the Church and one of the first seven deacons. He was stoned to death by the Jewish authorities. The words he spoke in his own defense are recorded in the Acts of the Apostles. This New Testament book tells us that Stephen was filled with the Holy Spirit. He was accused of blasphemy. The Jewish High Priest asked him if this was true. He answered: “…Brethren and fathers, hear me. The God of glory appeared to our father Abraham…” (Acts 7:2)

Filled with the Holy Spirit, St. Stephen addressed those who accused him of blasphemy, including the religious authorities as father and also referred to Abraham as father; all in one sentence. He continues to use that term in his other sentences.

The Example of St. Paul

St. Paul wrote two New Testament epistles to the church at Corinth. In his first letter, he wrote: “I do not write this to make you ashamed, but to admonish you as my beloved children. For though you have countless guides in Christ, you do not have many fathers. For I became your father in Christ Jesus through the gospel. I urge you, then, be imitators of me. Therefore I sent to you Timothy, my beloved and faithful child in the Lord, to remind you of my ways in Christ, as I teach them everywhere in every church.” (1 Corinthians  4:14-17)

Here is St. Paul using father to describe his spiritual relationship with the Corinthians whom he called his children. We might know him as St. Paul… the Corinthians might have known the apostle as Father Paul. Really, our use of father, in one sense, is no different than the terms used to describe spiritual relationships in non-Catholic Christian churches, such as pastor or teacher.

St. Paul also tells us in this letter that different people in the Church have different gifts. Here we find the term teacher. “And God has appointed in the church first apostles, second prophets, third teachers, then workers of miracles, then healers, helpers, administrators, speakers in various kinds of tongues.” (1 Corinthians 12:28)

SO, WHAT DID JESUS REALLY MEAN?

Able now to look at the entire context of Matthew 23:1-12 without a predisposition against calling Catholic priests, father, what can we discover? The last verse is instructive, “whoever exalts himself will be humbled, and whoever humbles himself will be exalted.”  Jesus is obviously teaching against those who would exalt themselves. With that key, we look at how He describes those He criticized.

“The scribes and the Pharisees sit on Moses’ seat; so practice and observe whatever they tell you, but not what they do; for they preach, but do not practice. They bind heavy burdens, hard to bear, and lay them on men’s shoulders; but they themselves will not move them with their finger. They do all their deeds to be seen by men; for they make their phylacteries broad and their fringes long, and they love the place of honor at feasts and the best seats in the synagogues, and salutations in the market places, and being called rabbi by men.” (Matthew 23:2-7)

The scribes and Pharisees might have started with the best of intentions, but they came to enjoy the honor and obedience they demanded more than the service they provided. In doing so, they separated themselves from the true Fatherhood that comes from God alone. They were not fathers, they were hypocrites. Only those leaders who cultivated a following were called father, therefore it attached to the person. In the Catholic Church all priests are called father, the title is a sign of respect for the office. It is concerning those who would separate themselves from the Fatherhood of God, replacing God with themselves, that Jesus condemned.

In my life, I was blessed with a biological father who exhibited the very best of the Fatherhood that comes from God. Yes, he failed on occasion as we all do. But, with affection and respect, I called him daddy.

I have also been greatly blessed the many priests who I most willingly call father as well, and I am certain that Jesus approves. He sent them to me.