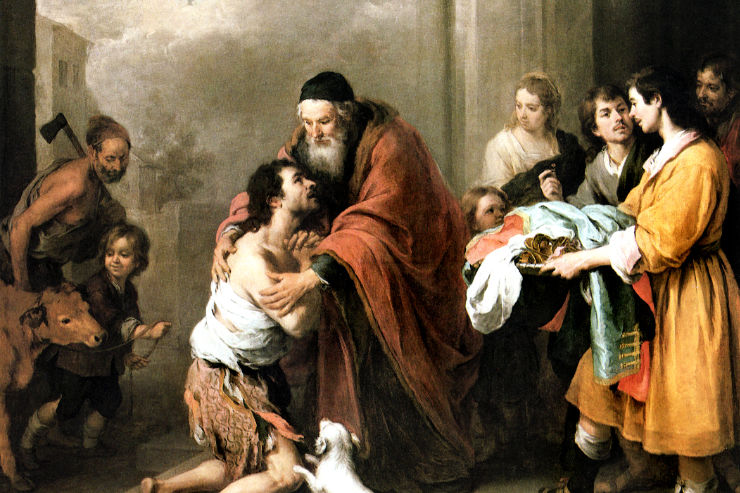 Some weeks, the connection between the Sunday Mass readings is obvious.  Perhaps the Old Testament reading is a clear foreshadowing or example of typology for the Gospel reading. Or all the readings point to a common theme, like the importance of a calling. Looking over the this coming Sunday (Fourth Sunday of Lent, Year C), nothing immediately caught my attention. So I sat with them awhile.

In the first reading from the book of Joshua, the Israelites have just crossed the Jordan River into the Promised Land. It is the first month of the year, Nisan, and the people kept the Passover on the 14th day, as commanded by the Lord. This is the third Passover celebration. The first was in Egypt; the second was while wandering in the wilderness (Numbers 9); the third is here, just after crossing the Jordan (on dry ground, similar to the crossing of the Red Sea).

In their celebration of the Passover, they eat “of the produce of the land.” The next day, the manna ceased. The miraculous food, which God had given them daily in the wilderness, ceased. They no longer needed it.

The Gospel is the familiar parable of the Prodigal Son. What is the connection between this beloved parable and the cessation of the gift of manna? I was stumped. Until I started to reflect on the common thread between the two stories: a loving Father.

God is a Father who will take care of us. He will provide for us – maybe not what we think we should have, but exactly what we need. That might require trust, as the manna did. Each day, the Israelites were to gather exactly what they needed. If they gathered more, the leftovers stunk, infested with worms. With the exception on Fridays (when they gathered enough for the Sabbath as well), they were to gather only what they needed for a day. They had to trust that God would provide. And he did. He never failed them.

He did not fail them, despite their grumblings and sins. God was faithful, even in the midst of their wanderings. God punished them for their sins, yes, but he never stopped loving them. He never ceased to be their loving, caring Father.

We see that same loving Father in the Gospel. There is the loving Father, who does not fail his sons – either of them. Despite their grumblings and their sins, He is faithful. He provides for his sons – maybe not what they thought they should have, but gives them exactly what they need.  They were made for His house. And He would do anything to help them live there.

You and I are the wandering Israelites. We are the prodigal younger brother. We are the older, bitter brother. Ultimately, we belong in the Promised Land. The Father’s House. Heaven. And our loving Father will do anything to help us live there. He gives us reminders in His Word of Who he is and who we are. Archives us the Sacrament of Reconciliation for when we wander, to welcome us back. And He gives us daily bread, the New Manna, the Eucharist, as food for our journey.

Ultimately, He gives Himself.

Loving Father, we thank you for the gifts you give us every single day. We repent of the times we have wandered. We yearn to be in Your house, and we look forward to the day we eat and drink of the produce of the Promised Land with you in your kingdom.

Image credit:” The Return of The Prodigal Son  » (detail) by Murillo | Restored Traditions