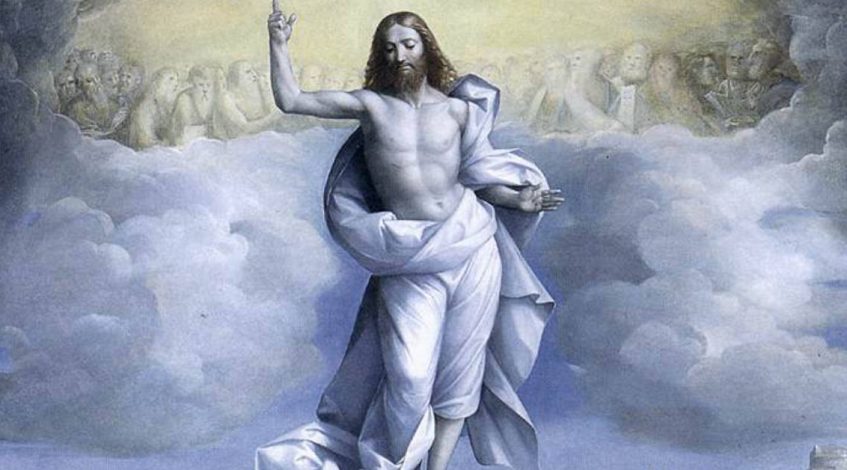 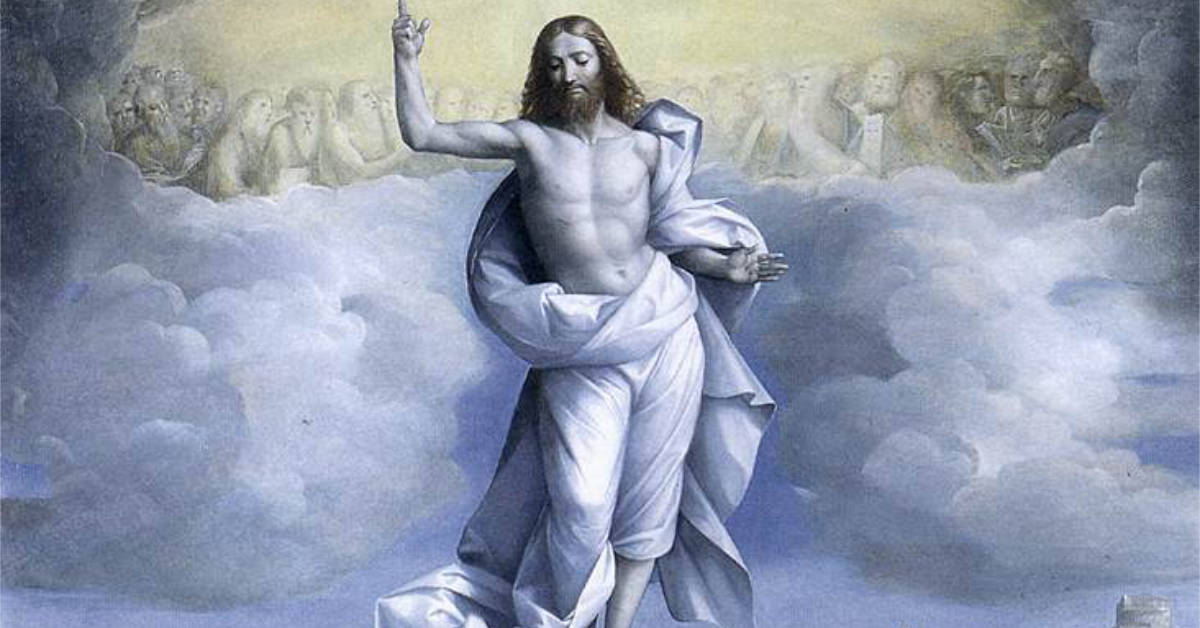 Years before that first Ascension Thursday, God entered into His own creation as the God-man, Jesus. He came as a humble babe, conceived of the Holy Spirit and born of the Virgin Mary. His birth took place in a stable that housed livestock. Little is recorded of His early years; He was a thirty-year-old when He began His public ministry. During the next three years, He proclaimed the Kingdom, prepared His apostles, healed the sick, forgave contrite sinners and performed miraculous signs before thousands…  He did the work of the Father.

Then it seemed the wheels came off… He was arrested, tortured, crucified and buried by the authorities, betrayed by one of His chosen apostles and abandoned by the rest. Only St. John watched as He died on the Cross. When the world could not seem darker, He rose from the dead on the third day and for the next forty days, He appeared before many witnesses and continued to teach and prepare His apostles. Doubt, confusion and pain gave way to hope and joy.

“But, can’t you stay Lord, just a while longer?” Imagine the apostles’ emotions… what a ride!  In my prayers, I have often meditated on how they must have felt at the Crucifixion, contrasting the exhilaration experienced during the Lord’s public ministry to the anguish and uncertainty that followed His death. And I have learned from them the importance of relying upon the Blessed Mother for strength and consolation during times of trouble and doubt.

The apostles went from the mountaintop back to the depths of the valley, but now, following the Resurrection, they are back from the brink.  All is well again. Yet, Jesus has told them, He must now return to Heaven.  He will not be with them in the same way He was previously. I can sense the uncertainty they must have felt in the questions they asked, “Lord, will you at this time restore the kingdom to Israel?” (Acts 1:6).

Jesus had to return to the Father, but He promised them He would not leave them orphans, “And I will pray the Father, and he will give you another Counselor, to be with you forever, even the Spirit of truth, whom the world cannot receive, because it neither sees him nor knows him; you know him, for he dwells with you, and will be in you” (John 14:6-7).

For this to happen, Jesus had to go.

A Time for Growth

It is the way of our life.  We come into the world defenseless and dependent upon our parents. When we are still children, we learn from them, are cared for by them and taught by them. When we are mature, we are ready to strike out into the world.

The same was true of the apostles.  Jesus had selected His chosen twelve and nurtured and raised them for three years, giving to them the Revelation of the Father—the Deposit of Faith. Ready now to carry on His mission, He promised them a Counselor—the Holy Spirit—Who would come in ten days on Pentecost.

So they returned to Jerusalem, to the Upper Room. “Then they returned to Jerusalem from the mount called Olivet, which is near Jerusalem, a sabbath day’s journey away; and when they had entered, they went up to the upper room, where they were staying, Peter and John and James and Andrew, Philip and Thomas, Bartholomew and Matthew, James the son of Alphaeus and Simon the Zealot and Judas the son of James. All these with one accord devoted themselves to prayer, together with the women and Mary the mother of Jesus, and with his brothers.” (Acts 1:12-14)

I was once talking with a non-Christian and he asked, “So what’s the difference? Before Christianity, the Jews had their God and look what it got them… always moving through cycles of obedience and sinfulness. And now look at you Christians, isn’t it the same thing through your history?”

The difference is both simple and profound.  In the elder days, God was fathering His beloved, chosen “first-born” people, preparing them for the coming of the Messiah and the ushering in of His Kingdom. Jesus, by His sacrifice, has paid the price for our sin and redeemed us from the evil one. In these present days, we live now, since His Ascension and the coming of the Holy Spirit at Pentecost, in the end times… in His grace by faith. Our sin paid for, we are now by that grace able to grow in holiness and perform works pleasing to Him. We now have access to Salvation. We are adopted sons and daughters of the Most High!

Before Christ, we were estranged from God. Since Christ, we have become the Father’s children. During the time Jesus was on earth, God dwelt with us. And now God remains with us still.

We have received the pearl of great price—Jesus Christ and the fullness of Truth. We have not received this gift to hoard and keep to ourselves, but to share with others. Jesus established His Church and sent it out to proclaim the Good News of Salvation to both Jews and Gentiles… to all the nations.

Throughout salvation history, each person has had his role in this grand drama. Before the coming of the Messiah, some were priests, some were rulers, some were prophets and some were everyday, ordinary people of faith who were to shine forth His goodness by their very lives. This was no different when Jesus dwelt among us before the Ascension. Some were disciples, others apostles—and Peter singled out to one day be their head—and of course there was only one Lord.

In the time of the Church, Jesus left us the apostles and their successors—the bishops—others He called to be priests and others deacons. But it was not to these alone that He bestowed His grace and gifts.  The Holy Spirit bestows different gifts to different people, as He wills.

We are all called to a great work to give witness to Christ and His Gospel, but all are not called to live this work out in the same manner and role.

None of us, no matter what our calling may be, are alone—not in the way that those who lived before Jesus were alone. For our God is with us in our day like never before and He walks with us and carries us when necessary and when we permit Him to do so.

We have been called to the greatest work and adventure ever known to man. God has called us to carry on His work of redemption in fidelity to Him and His Church, bringing the good news to all He places in our path.

Find us worthy, Lord, of this great trust.