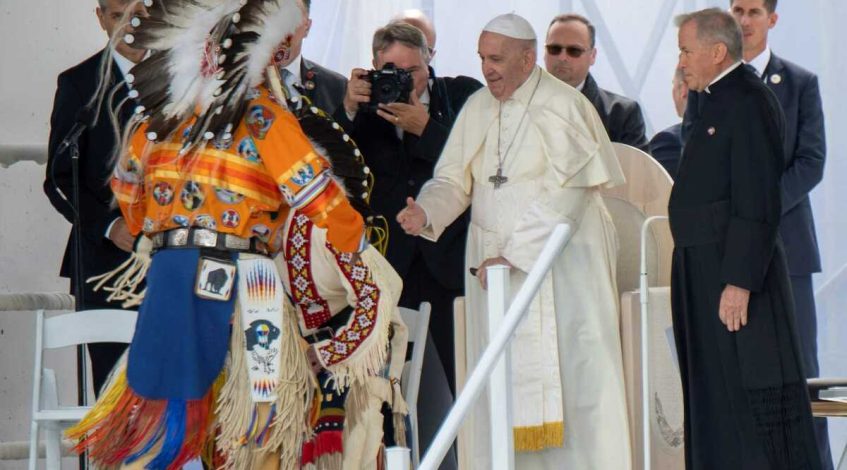 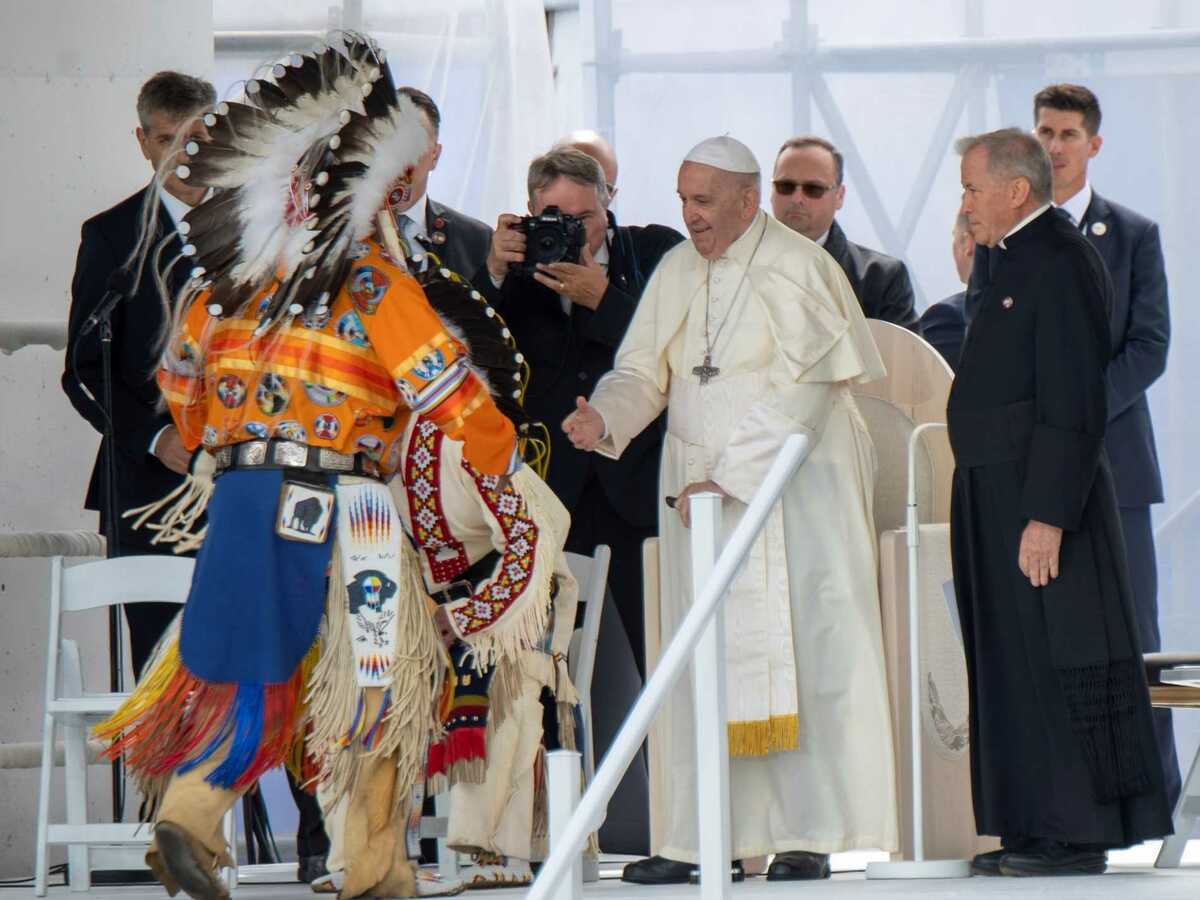 Pope Francis has made his pilgrimage of penance to Canada, which marks a pivotal moment in the Catholic Church and Indigenous peoples’ journey towards potential reconciliation. This was one of the ninety-four Calls to Action outlined by the Canadian Truth and Reconciliation Commission in the wake of their seven-year effort to document, inform, and seek justice for First Nations, Inuit, and Metis peoples across Canada. The visit from Pope Francis on Canadian soil to apologize for the residential school system marks another step in what is insisted upon by Indigenous peoples and the pope himself to be an ongoing journey toward healing. In his apology, Pope Francis declared “that is only the first step, the starting point” for a long road toward creating a right relationship.

Last year, news outlets highlighted numerous reports of the rediscovery of unmarked graves at a multitude of former residential schools across Canada. The graves were reminders that many Indigenous young people did not make it home. Though many Indigenous peoples knew this history, it was retraumatizing to be reminded in such grim ways of those lost children. For many non-Indigenous in Canada and the world, it was the first time they were introduced to the magnitude of the devastation faced by Indigenous peoples as a result of the residential school system.

The reaction to this history from Catholics themselves, both Indigenous and non-Indigenous, often fell into two categories. The first was a sense of devastation and even shaking of one’s individual faith, rooted in despair of the Church’s role in this history as an active participant and instigator. The other was often a reactionary defensiveness of the Church and its actions held onto by a notion that people involved in the residential system believed they were doing good. Both of these reactions fail in different ways to fully understand both the hope of the Gospel as the reason for condemning Church involvement and the responsibility that the Church has in addressing this history and holding itself accountable.

For a deeper investigation of this theological approach to understanding the Church’s response to the residential school history, I recommend reading an article by theologian Brett Salkeld. He helps guide us in building a theological platform to engage and understand this issue and how we might open the door for the healing necessary to move us forward as Pope Francis has now called upon the Church to do. The pope’s pilgrimage of penance should be instructive for us. When we seek atonement in the sacrament of reconciliation, as Salkeld explains, we must do penance as well because “genuine sorrow over sin desires to make reparation.” That is the work moving forward from this pilgrimage. How does the Catholic Church desire to make reparation and what are some of the ways in which it can begin to do so?

The actual work of reconciliation will not be in the pope’s hands. Through issuing his apology, Pope Francis has called upon the whole body of Christ to now take the steps necessary to face our history as a Church in North America and seek to right our relationship with Indigenous peoples. This is not to say that there is not more Pope Francis can do from his position on the seat of St. Peter. It is clear that Pope Francis must also now consider how the Church can decidedly renounce the Doctrine of Discovery. He must also direct the Vatican Archives to work with Indigenous communities to discern what artifacts should be repatriated to those native nations knowing that many of them were gifts from the native communities themselves while others may be the product of various forms of colonial theft.

Other areas of truth, reconciliation, and healing, however, must come from local communities, Catholic parishes, and the dioceses themselves. In the calls from different Indigenous peoples, there have been various requests as to what “the Catholic Church” can do in order to atone and repair. It is important to remember that Indigenous communities are not monoliths and thus there can be plenty of disagreement among the Indigenous themselves as to what these methods of repair should be. Broadly speaking, however, we can identify several categories of work that churches can think about moving forward:

Bishops across Turtle Island would do well to build relationships with their tribal communities both within and outside of their diocese in order to address these areas. Meaningful dialogue at the local level would reveal the ways in which the Church can support these efforts and discern what is possible. Bishops’ conferences should support individual dioceses in these efforts to ensure every diocese can meet the needs of their communities.

These actions can and should be taken because the spirit of our sacraments calls us to do so. It is no individual today who is responsible for or should hold guilt for the sins of the Church’s past. We are however collectively responsible for how we repair relationships moving forward. To do so is to affirm the God-given dignity of Indigenous peoples and call us to a deeper relationship in order to create a new future together.

There was a moment after Pope Francis’s apology when Chief Wilton Littlechild of the Cree Nation approached the dais and gifted him a feather headdress, an item of deep spiritual and cultural significance to many tribal nations, by placing it on his head. This moment stirred immense emotions across Turtle Island for many Indigenous peoples, emotions that ranged from confusion, anger, horror, and joy. Regardless of one’s individual feelings about that moment and the image now captured for time immemorial of Pope Francis wearing this feather headdress, the reaction from different Indigenous peoples represents the magnitude of the Catholic Church’s outsized impact on the colonial past as a representative of it. The chains of that colonial heritage may never be fully cast off. But I want to note that connection because it names something that is also deeply challenging at this moment in time. The Church also needs healing from its own history.

The Catholic Church is the inheritor of a difficult legacy, nuanced as it is, that marks a deep stain on the integrity of the faith that clearly acted against its own core beliefs. Yet it is also the very realization of that fact that holds the faith together and reminds us that despite the failings of our past, this Church is full of goodness rooted in the Gospel truth. Our baptismal calling is at the root of our need not only to admit and atone for this history but to also deepen our faith and trust that God pulls us in the right direction by doing so.

Time and time again throughout the Bible, God demonstrates he stands with the poor and the marginalized. He is the God of the oppressed and the defender of the enslaved. How should his Church respond when it is realized that it acted as an oppressor rather than a liberator?

Along with the work outlined above, the Church can and should grapple with its own need for healing and use this opportunity to remind the body of Christ what our faith calls us to. Forgiveness is always a challenging task, perhaps one of the most difficult things our faith calls us to do. Indigenous communities will continue to discern how they approach forgiveness in all the ways they might do so, for being victimized in its own way can be a prison that only Indigenous peoples can free themselves from.

But forgiveness is not only for the victim. The legacy of the perpetrator also demands forgiveness in order to heal. In fact, forgiveness in this sense is only possible when the harmful act is acknowledged, named, and atoned for.

To be clear, Indigenous peoples do not need the Church to forgive itself. Healing can be done even in absence of the perpetrator’s apology. But we cannot deny that in situations where harm has been inflicted, the perpetrator of that harm has also wounded their soul, has sinned, and has a need for contrition, forgiveness, and healing from within. Pope Francis said, “We are speaking of processes that must penetrate hearts.” This moves us to a place of deep love rooted in Christ.

This has been and will be a difficult journey. There is no single solution to the longstanding history that continues to be a barrier between Indigenous peoples and the Catholic Church. But I firmly believe it is a wound that can be treated. Scars may remain and many Indigenous peoples may continue to distrust the Church. At the core of Indigenous traditions and the Catholic faith, however, is an abounding belief in love over hatred. While there will always be differences and distinctions, we can turn to love as a guide for the road ahead. For we believe we are all made in the image and likeness of God. I pray we find the many ways in which that love can be made manifest as we heal together.