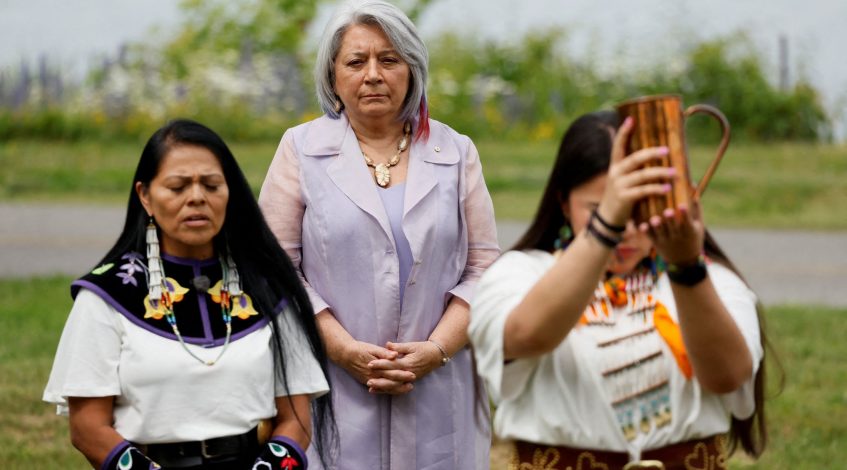 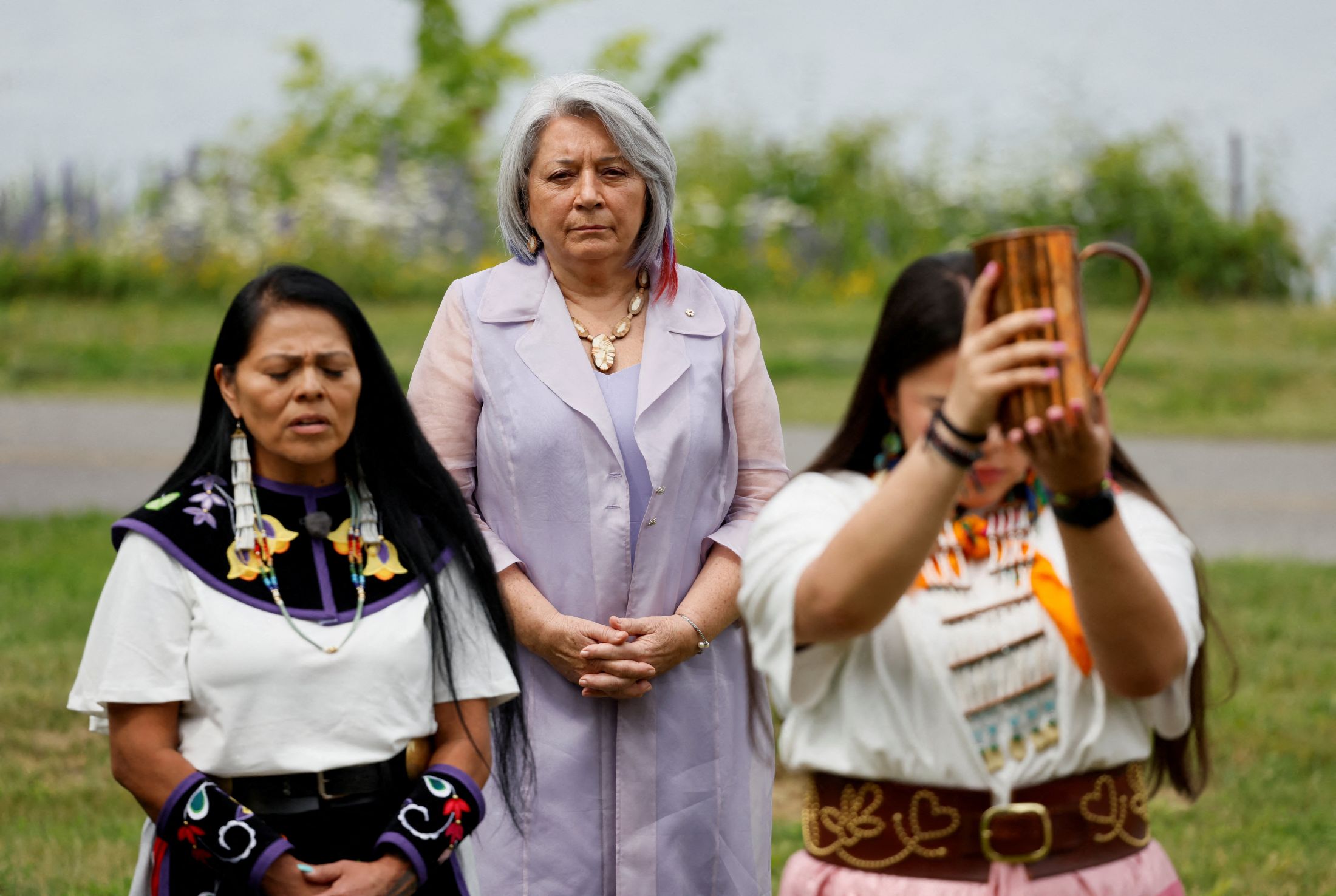 We first published this article July 14 and are encoring it ahead of the pope’s planned visit to Canada beginning July 24.

VATICAN CITY (CNS) — Pope Francis said all the speeches he has prepared for his trip to Canada “begin and end” with asking forgiveness.

In an early July interview, he acknowledged the “cruel way” the Catholic Church collaborated with the Canadian government in “colonization” by uprooting Indigenous children from their families, cultures and spiritualities and forcing them to attend residential schools where many suffered emotional, physical and sexual abuse.

Cutting children and young adults off from their cultures “is diabolical, it is to kill life and richness,” the pope said in the interview that aired July 11 on Univision.

Pope Francis is scheduled to be in Canada July 24-29, flying to Edmonton, Quebec and Iqaluit. He also will visit the site of a former residential school near Edmonton, join Indigenous pilgrims at Lac Ste. Anne and celebrate Mass at the National Shrine of Sainte-Anne-de-Beaupré near Quebec.

Ted Quewezance, a former chief of the Keeseekoose First Nation and former executive director of the National Residential School Survivors Society, was at the Vatican in early April when Pope Francis apologized to delegates of Canada’s Métis, Inuit and First Nation communities.

And he plans to be there July 25 when Pope Francis visits Maskwacis, Alberta, home of the former Ermineskin Residential School, one of the largest residential school sites in Canada.

Quewezance was one of the first survivors in Canada to speak publicly about having been sexually abused at a church-run residential school. While he still gets emotional talking about it — “when you shed a few tears, more weight comes off your chest,” he said — after the Rome trip he decided it was time to forgive and move forward.

Quewezance will be one of about 100 survivors and family members traveling to Maskwacis with Archbishop Donald Bolen of Regina, Saskatchewan, who also accompanied the delegates to Rome in late March and early April.

“In many Indigenous cultures, when there are issues between families, the fathers of those families must meet to discuss and heal those divisions and wounds,” the archbishop told CNS. “Pope Francis, rightly, is seen as the father of our global Catholic family. In this sense, it is important that he meet face-to-face with the leaders of the Indigenous, Métis, and Inuit families who, even today, continue to be affected by the harms caused by the residential school system.”

The pope, he said, consistently calls the church to “walk with others in all manner of woundedness. This is particularly true when those wounds have been caused by the church herself.”

Susan Beaudin, a member of the Cowessess First Nation, co-chairs with Archbishop Bolen the archdiocese’s Truth and Reconciliation Committee and is helping organize the Saskatchewan survivors’ trip to Maskwacis. But she will not be on one of the buses. Instead, she will join other survivors of Marieval Indian Residential School who will gather on the Cowessess territory to watch the pope on television.

She went to the Catholic-run school in the 1950s, from the time she was 8 until she was 13. Her parents and siblings and cousins all went there, too, and the family, like almost all the families of survivors, she said, are still dealing with sexual abuse, physical abuse, addiction and unhealthy relationships — the intergenerational trauma that began at the schools.

“Those people were working for the devil,” she said.

Rediscovering her people’s traditional spirituality and seeking healing through their ceremonies, Beaudin said she learned God really is the “all-loving and all-giving Creator and the forgiving Creator.”

Then, she said, “the onus was on me to forgive the Catholic Church. If I was to go further in my healing, I needed to do that. That’s why the papal visit is going to be very important to some survivors that need to hear that (apology) in order to continue their journey or to start their journey.”

Cassidy Caron, Métis National Council president, told CNS the pope’s apology in Rome was “the first step in our journey toward truth, reconciliation, justice and healing.”

The next step is for the pope to repeat the apology “in Canada where the highest number of survivors, elders, families and communities would be able to attend,” she said. “It is our hope that Pope Francis, the Vatican, and the CCCB (Canadian bishops’ conference) will fully commit to walking the path that we set out for them to join us on following the apology, and understand that this will be an ongoing process, and that it will take time.”

Canadian Cardinal Michael Czerny, prefect of the Dicastery for Promoting Integral Human Development, will be part of the papal entourage for the trip.

Asked what more the pope can do after his apology at the Vatican, Cardinal Czerny told CNS, “It’s not a matter of ‘doing more’ but of ‘going deeper.’ An apology can be achieved by a text, whereas reconciliation requires human encounter, a ceremony, a liturgy.”

“Humanly and spiritually speaking,” he said, “if you want to say sorry, taking the trouble to go in person and say it ‘among us’ is very significant; saying sorry is always worth repeating, you don’t just say it once and be done with it.”

And while Pope Francis’ visit will focus on the Indigenous communities of Canada, it is clear all Catholics and all Canadians have a role to play in discovering the truth about how the land’s original occupants were treated and how discrimination against them continues today.

“Catholics today may feel no share in the errors of the past, but they are called to care for those who today suffer the consequences of colonialism, racism and cultural repression,” the cardinal said. “The sins of the past live on, and everyone has a share in overcoming them.”