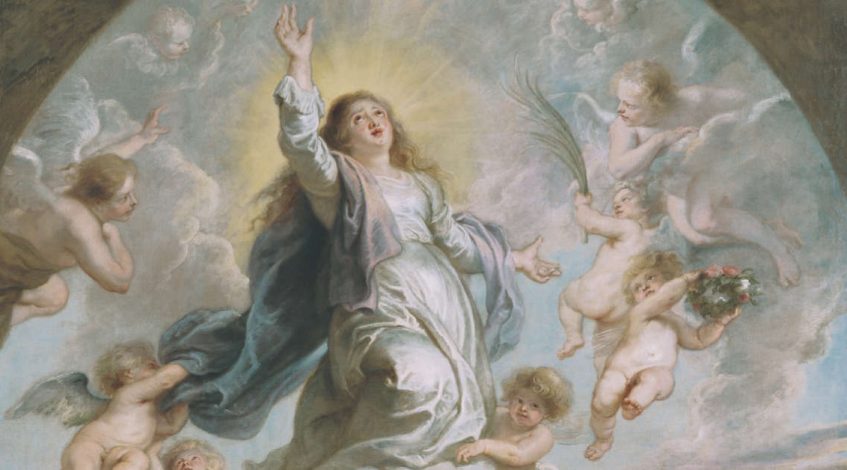 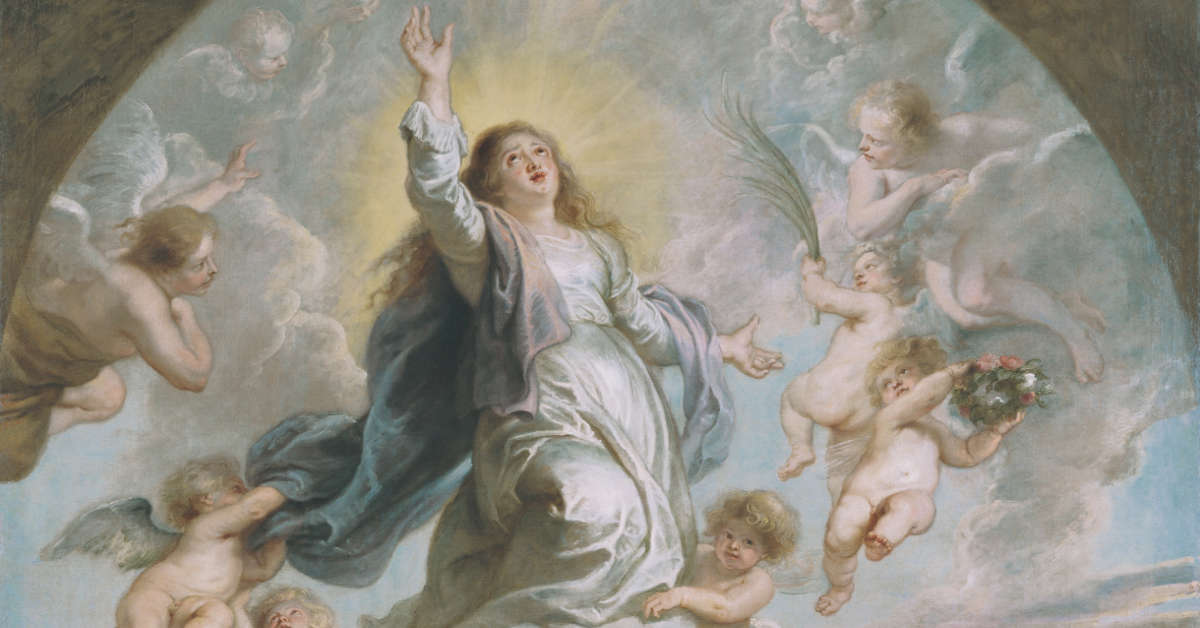 She who bore Him, led Him and followed Him in all ways was perfected in Him. And so too may we hope with confidence to be perfected in Christ by His grace in this life or the life to come and to join Him, body and soul on the last day.

Mary’s earthly death has been nearly unanimously held by the Church’s theologians through the centuries. The Church’s liturgies affirm this. Indeed, the Solemnity of the Assumption was first known and celebrated as the Feast of the Dormition (the falling asleep or death) of the Blessed Virgin Mary.

Testimony from sources, such as the Patriarch of Jerusalem in A.D. 451, reveal the accepted belief that no relics of Mary existed because she had been assumed, body and soul, into heaven; and that this belief came from apostolic times. By the eighth century, the name of the feast was changed from Dormition to Assumption. Although we do not know much of its early history, it is the oldest Marian feast day on the liturgical calendar.

The Catechism of the Catholic Church (CCC ¶ 966) provides early testimony from the Byzantine Liturgy:

In giving birth you kept your virginity; in your Dormition you did not leave the world, O Mother of God, but were joined to the source of Life. You conceived the living God and, by your prayers, will deliver our souls from death. (Byzantine Liturgy; Troparion, Feast of the Dormition; August 15th)

THE DOGMA DEFINED AND DECLARED

In 1950, Pope Pius XII proclaimed that the bodily Assumption of Mary was a dogma of the Church—it belonged to the deposit of faith.

(44) For which reason, after we have poured forth prayers of supplication again and again to God, and have invoked the light of the Spirit of Truth, for the glory of Almighty God who has lavished his special affection upon the Virgin Mary, for the honor of her Son, the immortal King of the Ages and the Victor over sin and death, for the increase of the glory of that same august Mother, and for the joy and exultation of the entire Church; by the authority of our Lord Jesus Christ, of the Blessed Apostles Peter and Paul, and by our own authority, we pronounce, declare, and define it to be a divinely revealed dogma:

that the Immaculate Mother of God, the ever Virgin Mary, having completed the course of her earthly life, was assumed body and soul into heavenly glory.

ASSUMPTION IS NOT THE SAME AS ASCENSION

This teaching does not mean that Mary, of her own power, ascended into Heaven.  Only Jesus ascended into Heaven of His own power and authority.  Rather, Mary, was taken up (assumed) body and soul into heaven by God.  This was an honor and grace given to her.  Therefore, we speak of Mary’s Assumption and not her Ascension.

Sometimes, non-Catholics hear us speak of Mary’s Assumption and conclude that we believe that Mary ascended to Heaven in the same manner as Jesus, under her own power.  In fact, the dogma simply states that Jesus took Mary, body and soul, into Heaven out of great love for her… just as each of us when we, pray God, are saved will be taken into Heaven body and soul after the general resurrection.  This teaching does not equate Mary with God, but rather first among the saved and assumed.

THE DOGMA IS CHRIST-CENTERED (CHRISTOCENTRIC)

This dogma both looks back to an historical event, with implications for our future, and to a spiritual event involving Mary.

The teaching is from Christ: “…singular participation in her Son’s Resurrection and an anticipation of the resurrection of other Christians…” and it is to Christ: “…that she might be the more fully conformed to her Son…” (CCC ¶ 966)

Like Mary, we too can look with hope to the future when, at the Second Coming of Jesus Christ, we will be taken into heaven, body and soul, by Jesus, and also be more fully conformed to her son.

The full text of CCC ¶ 966, from which references are cited above, reads:

“Finally the Immaculate Virgin, preserved free from all stain of original sin, when the course of her earthly life was finished, was taken up body and soul into heavenly glory, and exalted by the Lord as Queen over all things, so that she might be the more fully conformed to her Son, the Lord of lords and conqueror of sin and death.” [LG 59; cf. Pius XII, Munificentissimus Deus (1950):DS 3903; cf. Rev 19:16.]  The Assumption of the Blessed Virgin is a singular participation in her Son’s Resurrection and an anticipation of the resurrection of other Christians:

In giving birth you kept your virginity; in your Dormition you did not leave the world, O Mother of God, but were joined to the source of Life. You conceived the living God and, by your prayers, will deliver our souls from death. (Byzantine Liturgy; Troparion, Feast of the Dormition; August 15th)

TESTIMONY FROM THE EARLY CHURCH

One example from the sixth century provides us a glimpse of what Christians believed in the ancient Church concerning Mary’s death and assumption.

“The course of this life having been completed by Blessed Mary, when now she would be called from the world, all the Apostles came together from their various regions to her house.  And when they had heard that she was about to be taken from the world, they kept watch together with her.  And behold, the Lord Jesus came with His angels, and taking her soul, He gave it over to the angel Michael and withdrew.  At daybreak, however, the Apostles took up her body on a bier and placed it in a tomb; and they guarded it, expecting the Lord to come.  And behold, again the Lord stood by them; and the holy body having been received, He commanded that it be taken in a cloud into paradise: where now, rejoined to the soul, [Mary] rejoices with the Lord’s chosen ones, and is in the enjoyment of the good of an eternity that will never end.” (Saint Gregory of Tours, Bishop; A. D. 538 – A. D. 594); Eight Books of Miracles; A. D. 575-593; Jurgens III, § 2288a]

Relics from early Christians were collected for veneration, but no one, anywhere, ever claimed to possess a relic of the Blessed Virgin Mary. It is certain that if any relic had existed, there would be historical or pious evidence of its existence. Instead, the only testimony that can be found supports the dogma. True, this is only evidence from the “absence” of something that should be present if the Assumption was not true—e.g., Sherlock Holmes and the dog that didn’t bark. And it is also true that there exists no explicit testimony from Scripture, but that does not mean that there exists no scriptural basis for the belief.

We read in the Book of Revelation a vision of the Temple of God. The temple of God is opened and the Ark of the Covenant is revealed. Jews would recognize the significance immediately—the Ark had been long lost.

“Then God’s temple in heaven was opened, and the ark of his covenant was seen within his temple; and there were flashes of lightning, voices, peals of thunder, an earthquake, and heavy hail. And a great portent appeared in heaven, a woman clothed with the sun, with the moon under her feet, and on her head a crown of twelve stars; she was with child and she cried out in her pangs of birth, in anguish for delivery. And another portent appeared in heaven; behold, a great red dragon, with seven heads and ten horns, and seven diadems upon his heads. His tail swept down a third of the stars of heaven, and cast them to the earth. And the dragon stood before the woman who was about to bear a child, that he might devour her child when she brought it forth; she brought forth a male child, one who is to rule all the nations with a rod of iron, but her child was caught up to God and to his throne, 6 and the woman fled into the wilderness, where she has a place prepared by God, in which to be nourished for one thousand two hundred and sixty days” (Revelation 11:19 – 12:1-6).

CONFORMED TO HER SON

The Assumption of Mary, body and soul, into heaven—that Mary would be so treated and honored by Christ—makes sense from the whole of Divine Revelation . She who bore Him, led Him and followed Him in all ways was perfected in Him. And so too may we hope with confidence to be perfected in Christ by His grace in this life or the life to come and to join Him, body and soul on the last day.