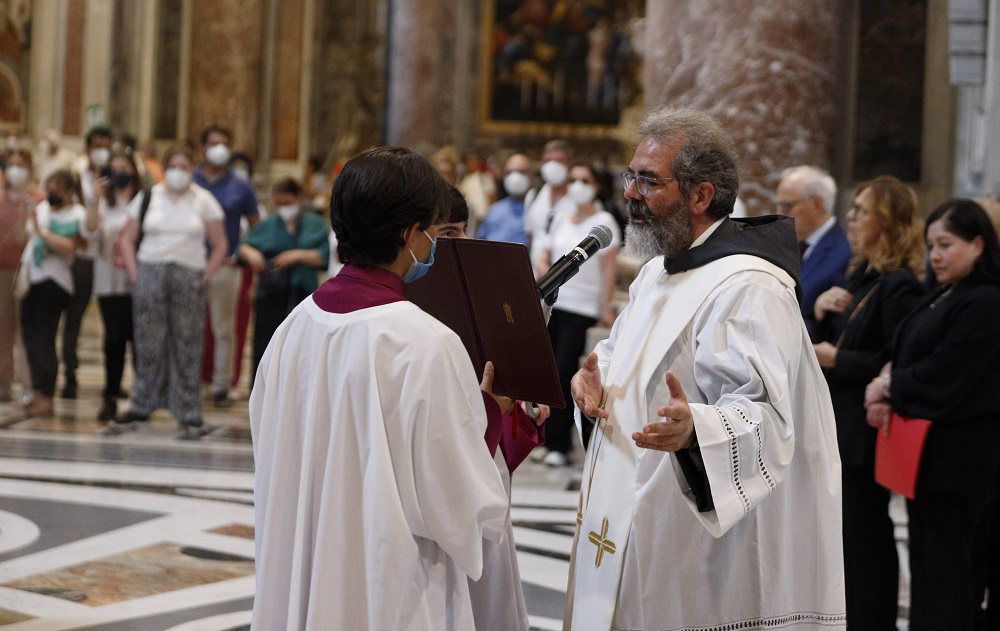 VATICAN CITY (CNS) — In his small office next to the world’s largest Catholic Church, Conventual Franciscan Father Agnello Stoia spoke about the unique joys and challenges of being the pastor of St. Peter’s Basilica.

Like most parishes, St. Peter’s has actual territorial boundaries: the exterior walls of the basilica and all of St. Peter’s Square.

But unlike most parishes, the only people who dwell permanently within the parish boundaries are deceased: the saints and former popes who are buried near the tomb of St. Peter.

Pope Francis named Father Stoia pastor of St. Peter’s in 2021, after he had served eight years as pastor of the historic Church of the Twelve Holy Apostles in the center of Rome. The priest works with Cardinal Mauro Gambetti, another Conventual Franciscan, who is archpriest of the basilica and president of the Fabbrica di San Pietro, the office in charge of the basilica’s upkeep.

And there are dozens of confirmations each year as well, both individual adults and groups of young people, organized by parishes around Rome. But there also is a class of 40 youngsters from all over the city who are attending catechism classes at the basilica and will be confirmed in October, Father Stoia said, adding that finding a bishop to officiate is not a problem at the Vatican.

In addition to those who come to receive the sacraments, between 10 million and 20 million pilgrims and tourists cross the basilica’s threshold each year.

But “there are many people who come here only once in their life, so it’s a great responsibility,” he told Catholic News Service in late July.

The Franciscan said he tries to offer opportunities for tourists to transform into pilgrims as they enter the basilica.

Major papal celebrations do that, he said, but so can the sight of any person or any group praying in the church, which is why, on the Fridays of Lent this year, the basilica offered the Stations of the Cross. And during May, Father Stoia led a “Marian itinerary” of prayer before the various images of Mary in St. Peter’s, and Cardinal Angelo Comastri, the retired archpriest, led an evening rosary walk in St. Peter’s Square.

“The Holy Father wants the basilica to shine as a sanctuary, and a sanctuary resonates with these kinds of celebrations,” he said.

Moments of prayer that meld art and spirituality, he said, help visitors understand that the great artists who contributed to St. Peter’s Basilica were people of faith and that people of faith today still fill the space with their prayer.

“When tourists come in and see an altar server carrying the cross and one carrying a candle, when they hear the singing and smell the incense — even if they do not understand exactly what is happening — they immediately know they have been immersed in the sacred,” he said.

All are welcome in St. Peter’s, Father Stoia said, but those who work in the basilica are looking at ways to create a shorter line for people who want to enter to go to Mass, confession or pray in the Blessed Sacrament chapel. Especially in the summertime, the line to pass through metal detectors can wind around a very hot and sunny St. Peter’s Square.

For ministry, it’s the baptismal font in the chapel designed by Carlo Fontana, he said. “I really like to baptize, because you have an opportunity to do some catechesis, to speak with great freedom and interact with the family.”

“A special place for prayer is the Clementine Chapel” in the grotto of the basilica, he said. The altar there is placed against a grill through which one can see part of the original monument Emperor Constantine erected over what is believed to be the tomb of St. Peter. “I often go there.”

Father Stoia also admits that sometimes, “I ask for the keys, and I go down to the pallium niche” under the basilica’s main altar, which also is near St. Peter’s tomb. “But I go discreetly because other people cannot go down there, and I feel bad.”

Unlike most pastors, Father Stoia does not have most of the keys to the church. Those are held by the “sanpietrini,” the guards, ushers and technicians who staff the basilica under the direction of Cardinal Gambetti.

Although he does have a sort of “master key,” which he said is “the affection of the sanpietrini.”

“Learning their names, respecting them, not creating problems but trying to solve them, they return that with great affection,” he said. And sometimes with special visits.

After Easter Mass with Pope Francis in St. Peter’s Square, while the pope went up to the balcony of the basilica to deliver his blessing to the city and the world, Father Stoia and a sanpietrino climbed up winding stairs to the basilica’s main bell tower.

The friar wanted to join the bells in pealing the joy of the Resurrection.

“They told me to bring earplugs, but I didn’t use them because the tower is open,” so the sound is loud, but not deafening, he said. The amazing part, he said, is that the bells are supported by huge wooden beams that vibrate as the bells move.

“They told me that everything would shake, and it did, but I had so much fun,” Father Stoia said. “You have tons of bronze moving — bong, bong, bong — and the wood has to absorb it. I was like a kid up there.”