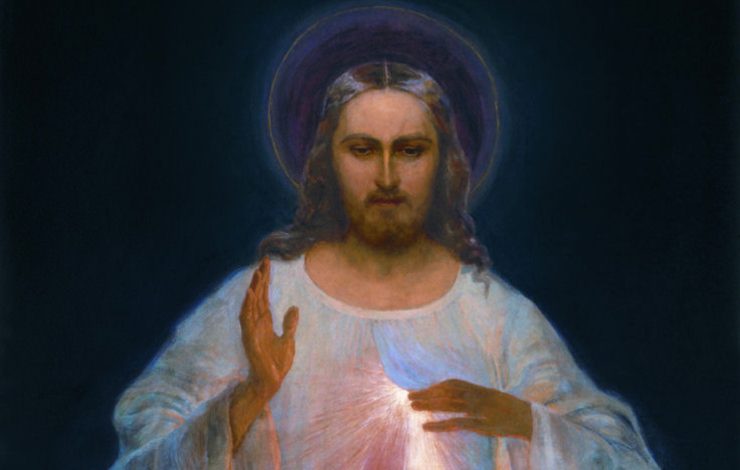 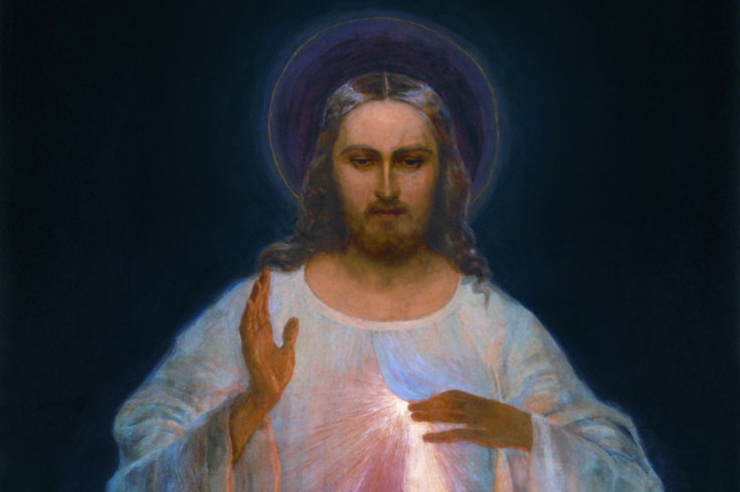 When I first entered Mount St. Mary’s seminary in Maryland, I met some fellow seminarians with a devotion to the Divine Mercy. They would often get together and recite the chaplet together. I was invited on several occasions to join them, but I always politely declined. I thought I didn’t need another devotion and preferred to use my Rosary beads for the Rosary. I also didn’t want to spend the time researching the devotion to see whether it was genuinely from the Lord or merely the latest Catholic fad.

Editor’s Note: This classic article from Fr. Landry, written before the canonization of Saint John Paul II, originally appeared in The Anchor, the weekly newspaper of the Diocese of Fall River, Mass, on April 17, 2009 and appears here with permission of the author.

When I got to Rome, my thoughts remained the same, but on my way back and forth between the North American College and St. Peter’s Basilica, I would always pass the Church of Santo Spirito, which was the center for the Divine Mercy devotion in Rome. One day I stopped into the Church to go to confession and the Church was packed with young people praying the Divine Mercy Chaplet. It struck me that in order to be a good priest, I minimally was going to have to study the devotion to be able to reply to young people like them should I ever be asked about whether it was salutary for their spiritual growth.

So I got a copy of The Diary of Blessed Faustina Kowalska, the 730-page journal of what this Polish nun during the 1930s said the Lord revealed to her as his “secretary.” I began to read it, but it gave me vertigo. It just seemed to repeat the same points with very minor changes, and I didn’t know what to do with the massive amounts of unsynthesized spiritual data. I read about half of it before I concluded I couldn’t take it anymore. Even though many of the points were beautiful and nothing seemed to be contrary to the faith, I determined to put off a final evaluation until I could muster the time and the willpower to return to finish it.

Everything changed for me, however, on April 30, 2000, the day Sr. Faustina was canonized by Pope John Paul II. That morning I celebrated Mass in a closed and almost totally empty basilica of St. Peter and headed to the Blessed Sacrament chapel to make my thanksgiving. When the Pope celebrated outdoor public Masses, I normally would stay there praying the breviary until the masters of ceremony arrived to pass out surplices and stoles for those who were going to be distributing Holy Communion during the Mass, a privilege that always came with a great seat.

That day, however, as I was finishing my thanksgiving, the unbidden thought came to me that Sr. Faustina’s canonization might be my last chance to see a papal Mass from the perspective of the piazza before returning back home to take up a pastoral assignment. So I walked through the Jubilee door about 7:30 and out into the square. Some of those who were responsible for seating must have erroneously thought that since I was leaving the closed basilica, I had to be someone important. I was able to proceed unimpeded to the back left corner of the front-right section before the altar. I wondered what I’d do for the three hours before the canonization Mass. As it turns out, I didn’t have to worry about how to occupy my time.

After I had finished morning prayer, a young man, one of the first people to enter the square after the gates were opened at 7:30, approached and asked me in Italian whether I would be able to hear his confession. “Certo,” I replied, as he knelt down on the hard stone of St. Peter’s square in front of me. After I had given him absolution, a young girl came and queried whether I spoke Spanish. I told her that I did, and she asked whether I would be willing to hear her confession, too. I said that I would be happy to do so.

For the next two hours and 45 minutes, until literally the opening antiphon of the Mass, I heard confessions non-stop in the back-left corner of the front-right section. Italians, Spaniards, Brazilians, French- or English-speaking Poles and Germans, as well as a few from Britain and the United States, all humbly knelt down and poured themselves out. I was blown away by the depth and tearful beauty of the penitents’ contrition and appreciation for the gift of God’s mercy. As only a priest could see from the “inside” of people’s souls, I witnessed the profound fruits that the devotion to Divine Mercy had produced in Catholics from various countries, cultures and languages. As Mass began, I thanked the Lord for having moved me to go out to the square that morning and for having used me as his instrument to share his Divine Mercy with so many.

During John Paul’s canonization Mass homily, I was surprised and thrilled when he said, “It is important then that we accept the whole message [of God’s merciful love] that comes to us from the word of God on this Second Sunday of Easter, which from now on throughout the Church will be called ‘Divine Mercy Sunday.… By this act I intend today to pass this message on to the new millennium.’” I knew that from that point forward, I was being summoned, as all priests were, to be a particular herald of that message. I felt that the experiences of that morning were a gift from God to help me to see the greatness of the interior miracles that the devotion could effect in people. I remember rejoicing that I would have the opportunity, returning to parishes in the Diocese, to bring this message and celebrate Divine Mercy Sunday each year as the culmination of the Easter octave.

When I came back exhilarated to the Seminary that afternoon, I couldn’t help talking about these experiences with my fellow neophyte priests and other seminarians. I asked one of the older seminarians, who had had a devotion to Divine Mercy for years, whether there was a better way to learn the devotion than through the Diary. He smiled, said he had had the same problem with the Diary, and then pulled off his shelf and lent me a great book by Fr. George Kosicki entitled Tell My Priests. This 123-page goldmine excerpts and organizes the Diary specifically for priests to learn the devotion and to pass it on clearly and passionately. Fr. Kosicki demonstrated, convincingly, that everything in the devotion is just an application of what Jesus himself did and preached in the Gospels. He also highlighted the messages that Jesus had specifically asked St. Faustina to tell his priests, one of which was that whenever a priest preached on his Divine Mercy, huge sinners would return to him. I honestly have to say that every time I have, the Lord’s prediction has come true.

Over the course of time, I have grown in love and appreciation for this devotion I love the fact that praying the Divince Mercy chaplet unites the two sacraments the Lord set up for us to receive thousands of times in our lifetimes, the Mass and the Sacrament of his Mercy. I’ve always looked at Eucharistic adoration as one means by which the Lord has established through mystics in the Church to help his people grow in appreciation of the great sacrament that is the source and summit of any Christian life. I now look at the Divine Mercy devotion — the prayers and the image — as the means the Lord established to help us to adore and appreciate him in the Sacrament of Confession.

The Divine Mercy is a devotion that has changed my life as a disciple and apostle and has brought me to experience much more fully the heart of the Redemption and the joy of life with the risen Christ. I encourage you, as we approach the feast of Divine Mercy on Sunday, to come to know the Lord more intimately through this ever-timely and beautiful devotion as well.