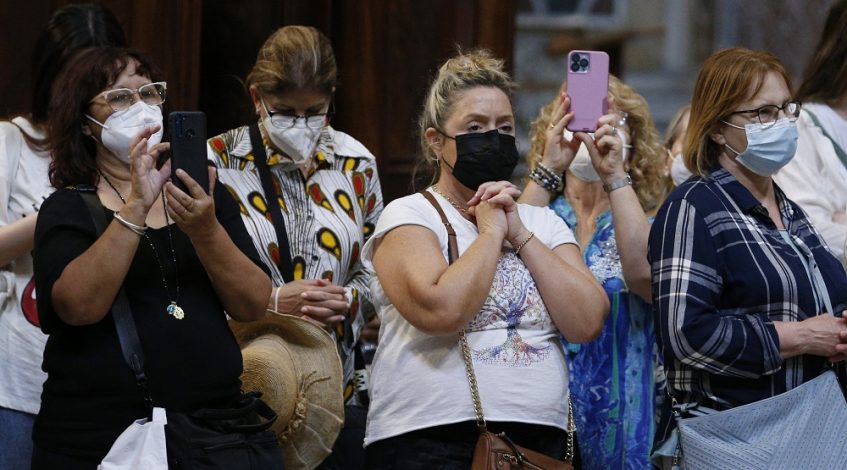 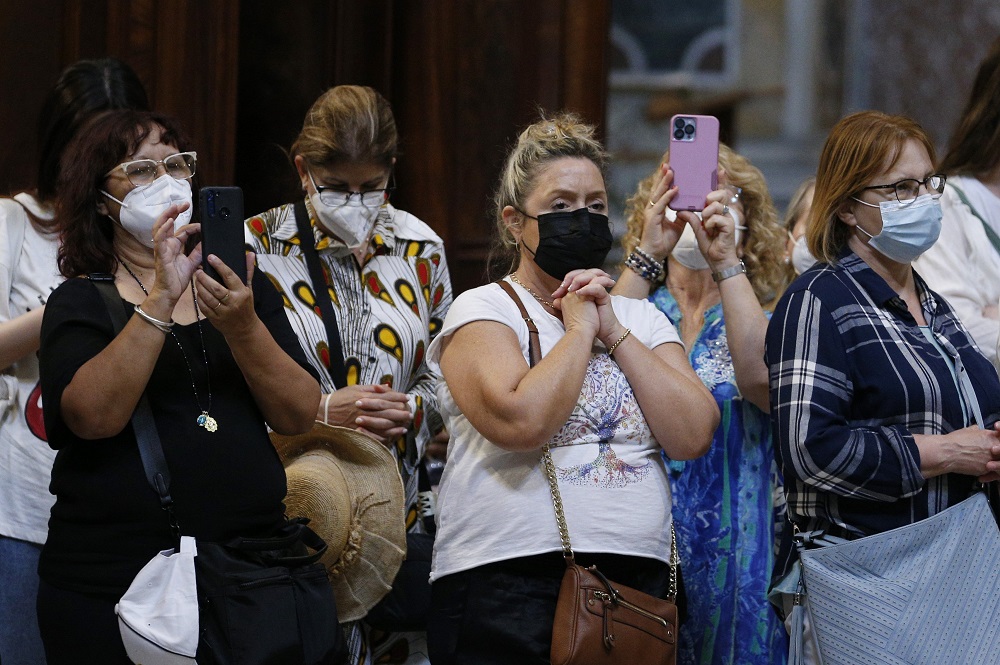 VATICAN CITY (CNS) — Cutting through the throngs of tourists following guides around St. Peter’s Basilica, a group of pilgrims led by the basilica’s pastor followed a “Marian itinerary” with special prayers to mark the month of Mary.

Conventual Franciscan Father Agnello Stoia, who became pastor of the basilica in October, leads the late afternoon prayer service on the Wednesdays of May.

As the priest, six altar servers and a 12-person choir led a small group around the basilica May 18, dozens of tourists stopped to take photos or videos with their phones while others joined in or tried to find a way to squeeze past the praying pilgrims.

The itinerary obviously includes Michelangelo’s Pietà — it is the second stop — but the pilgrims also prayed before seven other images of Mary, some older than the Pietà and several much less noticed by most visitors.

While dedicated to Peter, “the prince of the Apostles,” the basilica houses at least 50 images of Mary, “queen of the Apostles,” and many other symbols of her, including the eight-pointed marble stars embedded in the floor around Gian Lorenzo Bernini’s towering baldachin over the main altar.

Father Stoia said he chose to focus the itinerary on eight works of art in the basilica because of the association of Mary with the number eight — a number traditionally tied to salvation since, as 1 Peter 3:20 says, “a few persons, eight in all,” were saved on Noah’s ark.

The prayer service, which lasts just under an hour, begins in the atrium of the basilica, in front of the central door which, in the upper right-hand panel, depicts Mary seated on a throne.

As the pilgrims prepared to cross the threshold into the church, Father Stoia led prayers to Mary under the title “Gate of Heaven” and asked her to gather the petitions they would recite out loud and in the silence of their hearts and bring them before her son.

Father Stoia explained that the prayer service would be a mini-pilgrimage, “a symbol of our life’s journey” and of the pilgrims’ decision to imitate Mary and seek her assistance.

The second stop was in front of the Pietà, where Mary was addressed as “Redemptoris Mater,” Mother of the Redeemer.

Next were prayers in the Chapel of the Presentation, which features Giovanni Francesco Romanelli’s “Presentation of Mary in the Temple,” where the litany addressed Mary as “Ark of the Covenant.”

In the Chapel of the Choir, dominated by Pietro Bianchi’s painting of the Immaculate Conception, the pilgrims hailed Mary as “mother most pure, mother most chaste.”

In a tight passageway between the Chapel of the Blessed Sacrament and the northwest transept, Pope Francis had the basilica place an image of “Mater Peregrinorum,” (Mother of Pilgrims), a 16th-century painting of Mary with the child Jesus. The image had been carried in pilgrimage through the city of Rome during a plague in 1522; in front of the image, the pilgrims prayed that Mary would “protect us from the dangers of this world,” including sickness and war.

In the basilica’s Gregorian Chapel, St. Gregory of Nazianzus is entombed under a 12th-century fresco of Our Lady of Succor. The pilgrims prayed there to Mary under the title “Help of the Poor.”

Standing in the center of the basilica and looking up to Michelangelo’s massive dome, where a mosaic features Mary and St. John the Baptist seated on either side of Jesus, the pilgrims prayed to “Mary, Assumed in Heaven.”

The eighth and final station was in the extreme southwest corner of the basilica in the Chapel of Our Lady of the Column, named after a popular fresco of Mary that was on a column of the old St. Peter’s Basilica. The portion of the column with the fresco was saved and moved into the current basilica in the early 1600s, even before work on the building was completed. Mary is venerated in the chapel under the title, “Mater Ecclesia,” or Mother of the Church.