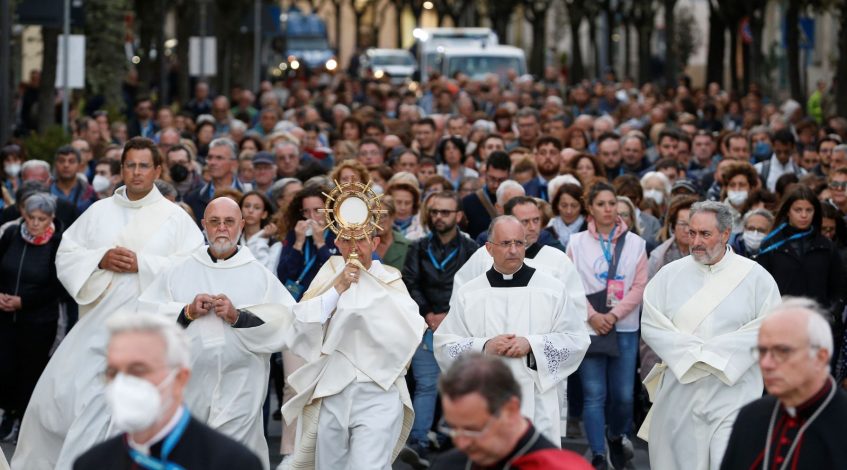 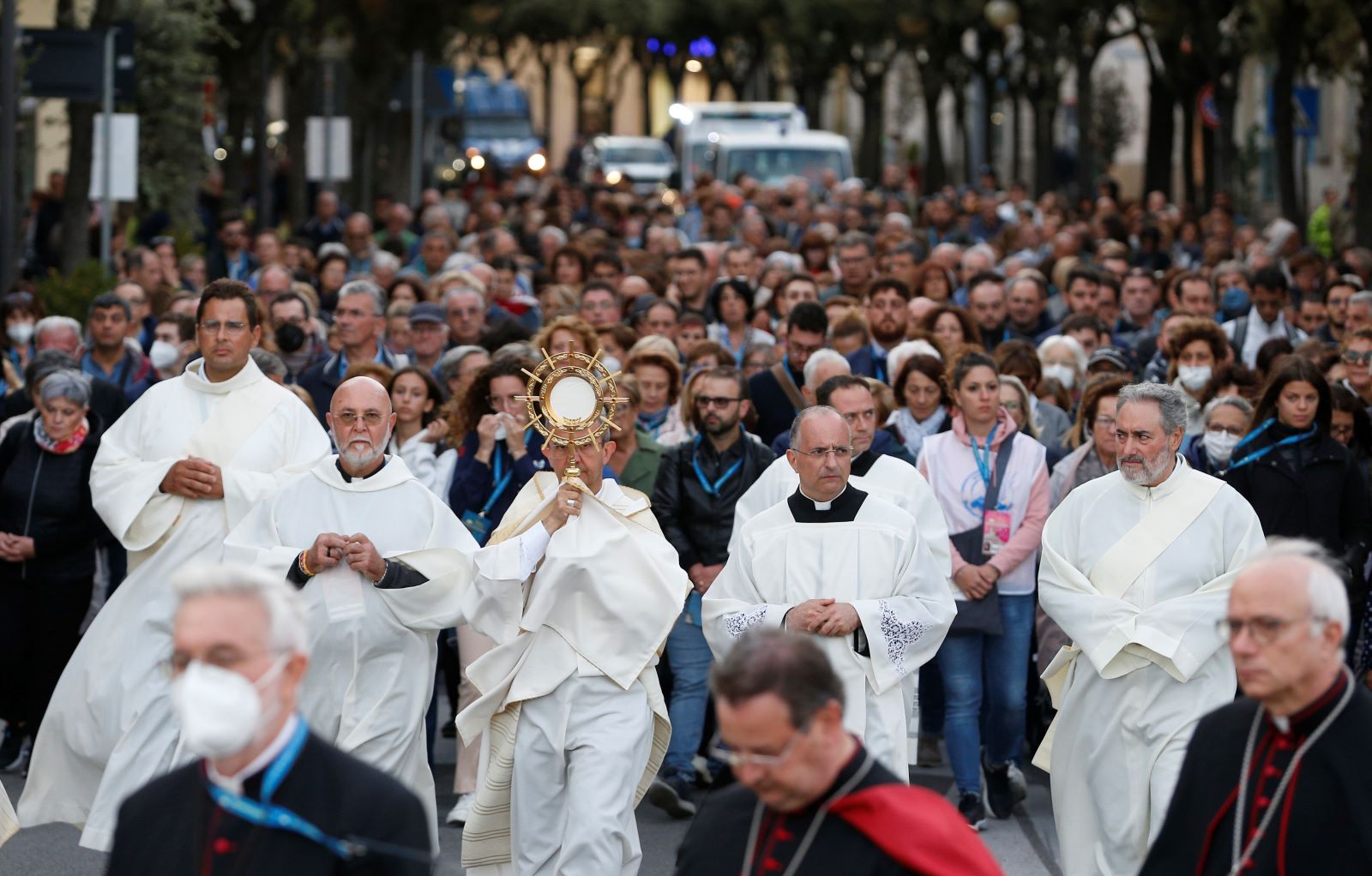 VATICAN CITY (CNS) — One cannot love and worship the Eucharist without compassion for the poor and marginalized, Pope Francis said at a Mass concluding Italy’s eucharistic congress.

“Let us recognize that the Eucharist is the prophecy of a new world, it is the presence of Jesus who asks us to dedicate ourselves to an effective conversion,” which includes the conversion from indifference to compassion, from waste to sharing, from selfishness to love and from individualism to fraternity, he said in his homily Sept. 25.

The pope concelebrated the Mass at an outdoor stadium in the southern Italian city of Matera, which was host to Italy’s 27th National Eucharistic Congress Sept. 22-25.

Rain, thunder and lightning storms forced the pope to travel by airplane and car rather than by helicopter from the Vatican.

In his homily, the pope reflected on the day’s Gospel reading (Lk 16:19-31), in which Jesus tells the parable about the nameless rich man who “dined sumptuously each day” and ignored the poor man, Lazarus, “who would gladly have eaten his fill of the scraps.”

When Lazarus died, “he was carried away by angels to the bosom of Abraham,” however, when the rich man died, he was sent to “the netherworld, where he was in torment,” according to the Gospel reading.

Pope Francis said, “It is painful to see that this parable” is still alive today with so many “injustices, inequalities, the unequal distribution of the earth’s resources, the abuse of the powerful against the weak, the indifference to the cry of the poor, the abyss we dig every day creating marginalization.”

All of this, he said, “cannot leave us indifferent.”

The parable talks about the abyss or great chasm that the rich man dug between him and Lazarus when they were alive, so now, “in eternal life, that gulf remains,” the pope said.

One’s eternal destination is determined by one’s earthly life, he said. “If we dig a chasm now,” separating oneself from others, then “we dig our own grave for later; if we raise walls against our brothers and sisters now, we remain imprisoned in loneliness and death later.”

The Eucharist offers a “permanent challenge” to adore and worship God, not oneself, the pope said, and “to put him at the heart” of everything.

“Only the Lord is God, and everything else is a gift of his love,” he said.

“If we worship ourselves, we die, asphyxiated inside our tiny ego; if we worship the riches of this world, they take possession of us and enslave us; if we worship the god of appearance and are inebriated in wastefulness, sooner or later life is going to ask us (to pay) the bill,” Pope Francis said.

“Instead,” he said, “when we adore the Lord Jesus present in the Eucharist, we receive a new way of looking at our lives as well: I am not the things I possess and the successes I am able to achieve; the value of my life does not depend on how much I can show off nor does it diminish when I go through failures and setbacks.”

“Every one of us is a child who is loved” and blessed by God, “who wanted to clothe me with beauty and wants me free from all enslavement,” he said. Those who worship God are free and are slaves to no one, he added.

The pope asked people to rediscover the prayer of adoration and to pray for a church that is “eucharistic, made up of women and men who break themselves like bread for all those who gnaw on loneliness and poverty, for those who are hungry for tenderness and compassion, for those whose lives are crumbling because the good leaven of hope has been lacking.”

The ideal, he said, is “a church that kneels before the Eucharist and worships with awe the Lord present in the bread, but which also knows how to bend down with compassion and tenderness before the wounds of those who suffer” and to become the “bread of hope and joy for all.”

“For there is no true eucharistic worship without compassion for the many ‘Lazaruses’ who walk beside us even today,” he said.

“While we are hungry for love and hope or are broken by the trials and sufferings of life, Jesus becomes food that feeds us and heals us,” he said, and while injustice and discrimination against the poor continue, “Jesus gives us the bread of sharing and sends us out every day as apostles of fraternity, justice and peace.”

After the Mass, Pope Francis went to the Archdiocese of Matera’s new Mensa della Fraternità, a soup kitchen and social center for the poor and the elderly. The pope greeted the staff and blessed the new structure, which was completed as a project in conjunction with the eucharistic congress.