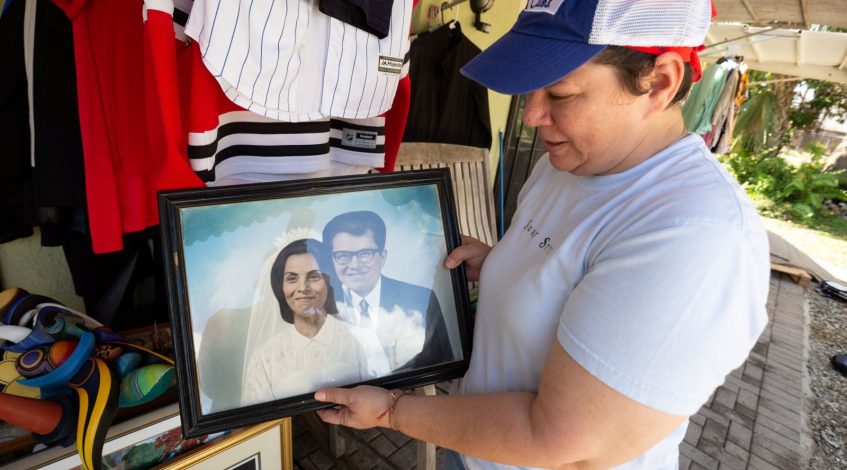 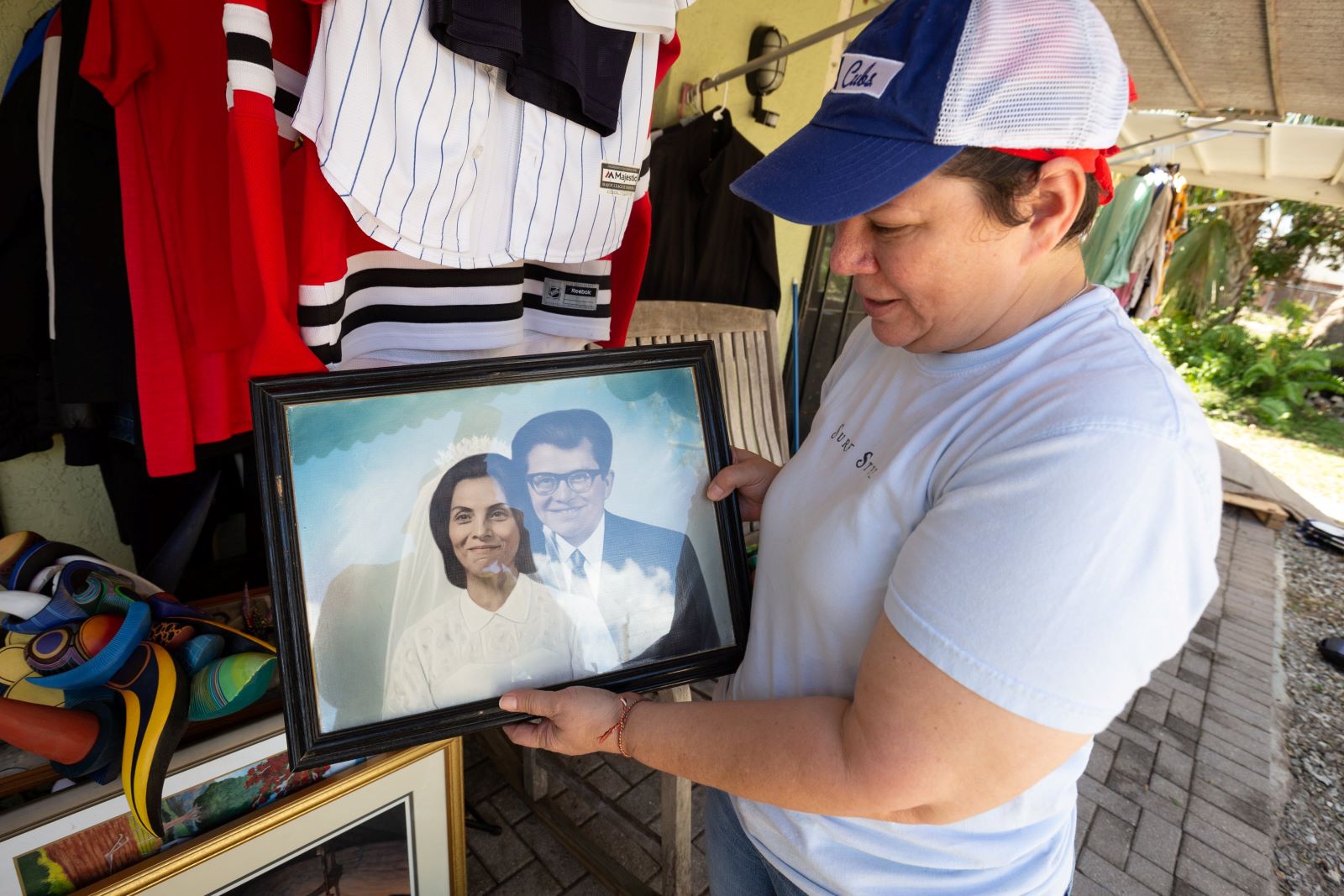 FORT MYERS, Fla. (CNS) — Normally an art teacher at a nearby community center, Elizabeth Reyes was surrounded by piles of her own art collection and family memorabilia, including her own wedding cake topper.

The clothing, the personal items, the wall art and musical instruments were stacked and hung out to dry outside a noticeably moldy house and with a nearby statue of St. Francis of Assisi that somehow still stood in the front yard following Hurricane Ian’s march across the area.

The house is in suburban Fort Myers in Lee County, near what is now considered the epicenter of Hurricane Ian.

The Florida county, which also includes Fort Myers Beach, Pine Island and Sanibel, suffered the most fatalities related to Hurricane Ian, which made landfall on the state’s west coast as a Category 4 storm Sept. 28.

Lee County will need a lot of rebuilding and flood-related cleanup and restoration for the foreseeable future.

“I was in such a rush to leave,” Reyes said Oct. 5, the day President Joe Biden and Republican Gov. Ron DeSantis held a joint news conference and damage assessment tour starting in Fort Myers.

Ian’s heavy rains brought 3 inches of water inside a small home she shares with Luis Reyes, a full-time employee of the Catholic Charities/Diocese of Venice.

Reyes finds herself leaping between worries: What will become of her pets? What to do about her rotting home and its contents? What about all the family pictures, and all the felled trees and the garden? How long will she and Luis need to rent their new Airbnb apartment in Naples, a 40-minute drive south?

And not least of all: What about the extra gasoline expense that will incur at a time when fuel supplies remain spotty in parts of Lee County?

“Our next steps are to get everything out of the house, redo the walls, floors, vanities, dressers and clean up the outside so it’s not dangerous to my grandson, who is autistic and puts everything in his mouth,” she said, reaching for a wedding portrait of her Puerto Rican-born parents.

“Photos are a big thing with us,” she said. “My father passed away in 1969 in Chicago, the only thing we have left are photos. I have seven brothers and two sisters and my mom is 88 years old. Thank God her house wasn’t affected, so some of the family are camped out there.”

A Mennonite emergency response volunteer on hand to help assess the home noted privately that the Reyes home will probably require almost complete removal of the flooring, all the kitchen cabinetry, and at least three feet of the dry wall around the home will need to go.

And he noted Florida’s strict permitting system for contracting and repair work.

An available licensed contractor will eventually be required to hook up the electrical connection that Ian’s winds knocked off the side of the house, leaving the home without electricity — yet another level of short-term misery for cleanup efforts.

Meanwhile, Catholic Charities of Venice is helping foot the bill for the apartment rental in Naples.

“I am so thankful to God that it wasn’t worse, the community is coming together, and our family is coming together,” said Reyes, who joked that her temporary apartment is outfitted with more modern appliances: “Everything is digital. I have no idea how to use the stove.”

Meanwhile, Reyes said she isn’t able to work and earn her teaching fee while area schools and normal life are all on hold. She works with disadvantaged youth as an art instructor at the Quality Life Center in Fort Myers.

Near the Reyes home, at the Elizabeth Kay Galeana Catholic Charities Center in Fort Myers, the CEO of Catholic Charities/Diocese of Venice, Eddie Gloria, was loading roofing tarps onto the back of his personal vehicle and getting ready to check on a few local families in crisis.

In addition to managing the flow of donated resources at some 13 local Catholic Charities distribution sites, the agency is coordinating a fast-moving flow of incoming material resources, while also looking after agency staff and church employees who themselves are living the emergency, according to Gloria.

At the end of the first week of October, the agency was moving from the assessment stage to a more operational stage as it came into focus where the most needs.

When Ian plowed into southwest Florida, the top gust recorded by a National Weather Service station was 155 mph at the Punta Gorda airport north of Fort Myers.

Although Tampa and Sarasota were expected to suffer the greatest impact from Ian, the storm came ashore further south and dealt its most powerful blow near Port Charlotte, north of Fort Myers.

Gloria said the easiest way to understand where the damage is greatest is in terms of the central corridor of Fort Myers and Lee County along with dispersed pockets of rural communities throughout the greater 10-county diocese. These areas suffered flooding as river waters spilled over into neighboring housing.

“We found that we could not get (emergency) products right after the storm as there was a lot of chaos and logistical problems, but finally the state organized itself and supplies are arriving,” Gloria said.

The agency’s disaster response specialists are moving ready-to-eat meals, water, tarps, baby items and nonperishable foods into the community by drive-up operations and delivery, he said.

The next stage for Catholic Charities here, Gloria added, will be sourcing additional forklifts and forklift operators to manage the flow of donations.

There also are local parishes and Knights of Columbus volunteers running their own emergency response programs effectively and Catholic Charities is supporting those parishes with donated goods and bottled water.

At the same time that Catholic Charities was setting up distribution sites, Gloria and his staff also created a phone tree to check on employees, five of whom, including the Reyes family, suffered severe damage to their home and property. Some may not have house insurance.

Gloria reasons that if the agency can take care of its own, it can turn around and help take of the community.

“You can’t ask people to put in 16-hour days helping everyone else when your household is upside down or your children are homeless or your wife or children are not in a safe place,” he said.

Gloria also reached out to the Venice Diocese for a list of all the teachers, principals and diocesan employees and priests who were affected by Hurricane Ian so Catholic Charities can offer them assistance as well.

“We feel like we need to target them because they are the ones who will open the parishes” and “open the community,” Gloria said.

“We have a list of families whose children are in the Catholic school system, especially those getting financial assistance,” he explained. “So these are families who maybe don’t have insurance.”

After checking on the Reyes family, Gloria planned to drive out to a flooded farm in Sarasota County where a group of six to 10 farmworker families were believed to be stranded, living in a barn and with nowhere else to go.

“We are now getting into the grueling work of cleaning up and reaching out to families to let them know we want to help the community and partnering with other groups,” he said, “What helps is that we have the backing of the diocese.”

“We have been through disasters before and our parishes will be a linchpin,” Gloria added.