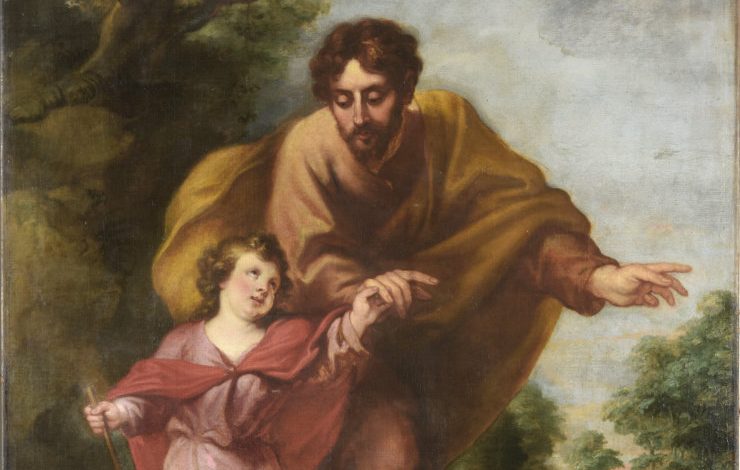 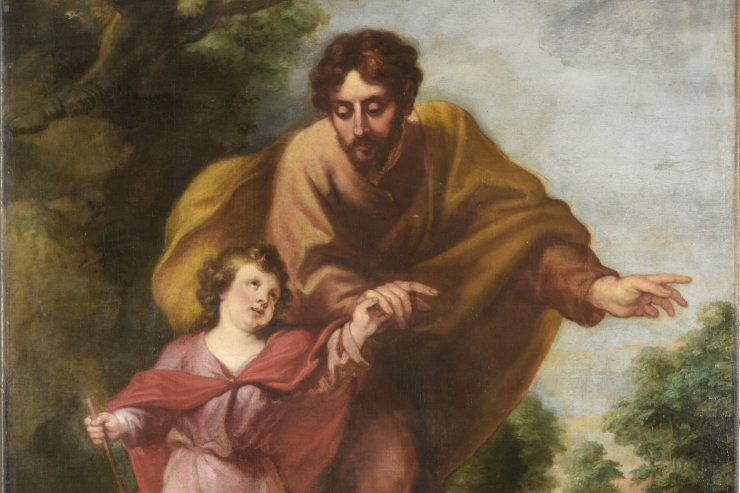 Today’s first reading, on this second Friday of Lent, is about Joseph being sold into slavery by his brothers. It is presented in the liturgy as a foreshadowing or type of Christ, who will be sold and rejected by the descendants of Joseph’s brothers. But Joseph is also a foreshadowing of St. Joseph, foster father of Jesus, whose feast we celebrate tomorrow.

St. Teresa of Avila famously encouraged everyone she knew to” Go to Joseph,  » a quote from Genesis 41:55. In the original quote, Pharoah is encouraging everyone to go to Joseph, who was distributing food during the famine. St. Teresa reminds us that we have St. Joseph, who distrbutes favors from the Lord:

“I cannot call to mind that I have ever asked him at any time for anything which he has not granted; and I am filled with amazement when I consider the great favors which God has given me through this blessed Saint; the dangers from which he has delivered me, both of body and of soul… Would that I could persuade all men to be devout to this glorious Saint; for I know by long experience what blessings he can obtain for us from God. I have never known any one who was really devoted to him, and who honored him by particular services, who did not visibly grow more and more in virtue; for he helps in a special way those souls who commend themselves to him… But I ask, for the love of God, that he who does not believe me will make the trial for himself—when he will see by experience the great good that results from commanding oneself to this glorious patriarch, and being devoted to him.”

I will admit that I took Teresa up on this challenge. Last year, I had a particularly difficult intention and decided to entrust it to Joseph. Even though I knew he was an incredible intercessor, I still was amazed at the outcome. I continue to pray to him every single day. Go to Joseph.

A Patron for Our Times

While we may not have the words of Joseph in Scripture, we have his actions. And repeatedly, we see that Joseph is a man of obedience. Even in moments of questioning and darkness, Joseph is faithful and obedient, even when he might not understand. Pope Francis says, “in every situation, Joseph declared his own ‘fiat’, like those of Mary at the Annunciation and Jesus in the Garden of Gethsemane » (Patris Corde)

His actions are one of selfless, courageous obedience – even in the face of confusion. We know the end of the story; Joseph did not. Mary is pregnant through the Holy Spirit. Go to Egypt, of all places. Come out of Egypt. Don’t settle with your family in Bethlehem, go to Nazareth. He did not have all the answers. He took it one step at a time. One obedient step at a time.

Joseph had to trust in the dark of doubt and uncertainty. God did not even give him an angelic visitor in the bright of day like Mary. Rather, he was asked to trust a dream. Four dreams!

He was a just man, a man of prayer. But God challenged even his discernment. Joseph was asked to accept plans quite different from the ones he had discerned. Instead of being attached to his own plans or even his own discernment, he walked forward in humility.

This is one of the most beautiful sections of Pope Francis’ letter on Joseph. How do we react to the plan of God, especially when it’s so different from what we imagined or planned? « Joseph set aside his own ideas in order to accept the course of events, and mysterious as they seemed, to embrace them, take responsibility for them, and make them a part of his own history” (Patris Corde)

Francis continues by reminding us, “We need to set aside all anger and disappointment, and to embrace the way things are, even when they do not turn out as we wish. Not with mere resignation but with hope and courage. … It does not matter if everything seems to have gone wrong or some things can no longer be fixed. God can make flowers spring up from stony ground.”

Go to Joseph. Ask for his help and imitate his example. Maybe life hasn’t turned out the way you planned. Perhaps you have some big questions for God. Maybe you wonder what the next few years bring for our Church, our country, or for your own life.

Rather than allow this to scare us, we should look to the example of Joseph.

Courage. Sacrifice. Obedience. These are the virtues and models for us, even in confusion, darkness, and suffering.

Life doesn’t have to be perfect for God to work. In fact, He does his greatest work with absolute messes! Pope Francis says,  » All too often, we think that God works only through our better parts, yet most of his plans are realized in and despite our frailty.”

God and Joseph at Work

Joseph reminds us that nothing – not even whatever might have happened to you in the past few years – is too big for God to work through. Not around, but through.

« Even through Joseph’s fears, God’s will, his history and his plan were at work. Joseph, then, teaches us that faith in God includes believing that he can work even through our fears, our frailties and our weaknesses. He also teaches us that amid the tempests of life, we must never be afraid to let the Lord steer our course. At times, we want to be in complete control, yet God always sees the bigger picture. »(Pope Francis, Patris Corde)

Go to Joseph. “It is now very many years since I began asking him for something on his feast, and I always received it. If the petition was in any way amiss, he rectified it for my greater good,” St. Teresa wrote. St. Joseph, help us through these times of anxiety and difficulty. Help us to be courageous, humble, and obedient as you were, even in times of uncertainty.