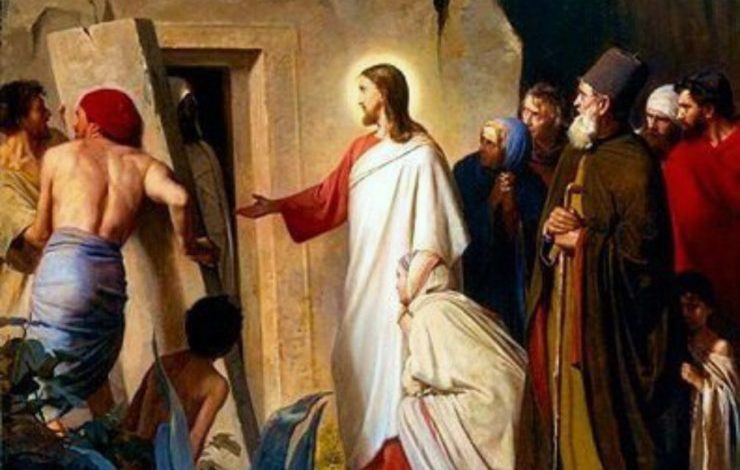 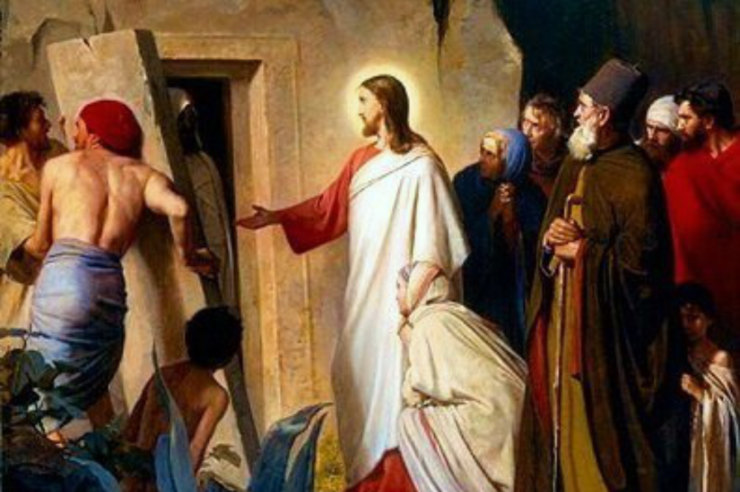 The Final Journey to Jerusalem Begins

The account of the raising of Lazarus from the dead by Jesus is the sixth of the seven signs in St. John’s Gospel that announce the fulfillment of the Old Covenant in the New Covenant and the passing away of the old rites, replaced by the grace and sacraments of Jesus Christ.

Most of us will not hear this Gospel from Year a today. But for those at a Mass where the scruples will be observed, it is the last of the three passages from St. John’s Gospel associated with the Scrutinies undergone by the elect who will be baptized at the Easter Vigil Mass.

Among all of the friends of Jesus beyond his Apostles, there were probably none closer to Jesus than Mary, Martha and Lazarus of Bethany, three siblings. We are told by St. John, “Now Jesus loved Martha and her sister and Lazarus” (John 11: 5). The account opens with a reference to Mary and Martha who sent word to the Lord that their brother was ill. Thus begins the account of the Lord’s final journey to Jerusalem reported in John 11:1 – 12:50.

So much of life is uncertain as we journey through this vale of tears. But there is one thing on which we can all depend: there will come a time when our earthly life will end and then we will find ourselves face to face with our God who will confirm for us our final decision for or against God and Heaven. That decision will last an eternity for human death, the temporary separation of soul and body, is nothing more than a passage from life on earth to the life to come.

The parting of a loved one from this life always seems to be a time of great sorrow for those who are left behind. Missed opportunities to express our love, maybe a neglected reconciliation among family or friends, or the regret at not having spent the time we should have with the loved one while they were alive and present to us, seem to be all too common occurances. But even for those without regrets, the sorrow at “losing” someone can hurt to the depths of our hearts.

Jesus, being True God and true man, was not immune to this sorrow as we shall see. So it may seem odd to the casual reader and to those who knew Jesus 2,000 years ago, that He delayed His journey to be with His old friend for two days before Lazarus died.

« When Jesus heard this he said,’ this illness is not to end in death, but is for the glory of God, that the Son of God may be glorified through it.’Now Jesus loved Martha and her sister and Lazarus. So when he heard that he was ill, he remained for two days in the place where he was. Then after this he said to his disciples, Let us go back to Judea.' »(John 11: 4-7)

When we lose a loved one, God knows by experience what we humans go through.  He knows the pain and sorrow we feel at that moment because he too has experienced it in the Person of Jesus Christ. As a child, many of us at a time of hurt, have hopefully heard a father or mother reassure us, “Everything will be okay.” And so, at the beginning of this passage we read that Jesus told The messenger sent by the sisters and He told His Apostles that all would be okay… “This illness is not to end in death, but is for the glory of God, that the Son of God may be glorified through it.”

So, upon first reading, we might be inclined to ask, “Why did Jesus delay in going to Lazarus? Isn’t it important to urgently come to the aid of a loved one in distress?” But that is a topic for another article.  All I will say here is this.  St. John uses much irony and other devices, probably because Jesus did too, to convey the message of his Gospel.  For example, the delay in Jesus arriving results in Lazarus being raised from the dead on the seventh day counting from the announcement of his illness and after four days in the tomb. Also, just as in the First Sign at Cana, there is a pattern: an implied request of Jesus, his apparent rejection of the request and the subsequent miracle performed by Jesus that serves as a sign pointing to the New Covenant and the Divinity of Christ. Instead of going deep into these aspects of the Gospel passage, let’s allow Jesus to give His own answer:

“He said this, and then told them, ‘our friend Lazarus is asleep, but I am going to wake him.’ So the disciples said to him, ‘Master, if he is asleep, he will be saved.’ But Jesus was talking about his death, while they thought that he meant ordinary sleep. So then Jesus said to them clearly, ‘Lazarus has died. And I am glad for you that I was not there, that you may believe. Let us go to him.' »(John 11:11-15)

Jesus had His reasons for delay—that the Apostles may come to believe and also so that we who are alive 2,000 years later may believe.  But what is it that the Lord desires us to know and believe? Again, Jesus provides the answer:

« Martha said to Jesus, ‘Lord, if you had been here, my brother would not have died. (But) even now I know that whatever you ask of God, God will give you.’Jesus said to her, ‘Your brother will rise. Martha said to him, ‘I know he will rise, in the resurrection on the last day. »Jesus told her,’ I am the resurrection and the life; whoever believes in me, even if he dies, will live, and everyone who lives and believes in me will never die. Do you believe this?’She said to him, ‘Yes, Lord. I have come to believe that you are the Messiah, the Son of God, the one who is coming into the world.' »(John 11:21-27)

When Jesus was taken by Martha to her sister Mary, Mary fell at the feet of Jesus and cried and told Jesus if only He had come sooner, Lazarus would not have died – the same heart-wrenching complaint given the Lord by Martha.  Jesus asked to be taken to where they had laid Lazarus and the scripture tells us, « And Jesus wept.(John 11: 35)

His humanity and the sorrow He experienced reaches across the years even to our day and touches our hearts. God does love us-yes there is no greater act of love than the Cross – but here we see Jesus experience the pain of loss in a way that is maybe more accessible to our understanding.  The Gospel tells us that He was perturbed.  He was troubled by the death, yes, but also at the fact that death had entered the world.  Jesus knows even better than we do of the pain of death brought to our experience by that first sin and the sins that followed.

Death Does Not Have The Final Word

So, when we have experienced such pain and sorrow, we can be sure that our Lord God knows what we experience first-hand.  But He knows something much greater than that and He wants us to know it too.  It is the reason for this sixth sign.

Jesus does not promise to protect you from the sorrow of this life nor does he deny its very real existence. He was perturbed, He was deeply troubled and He wept—as so many of us have hurt and cried.  But he does reassure us: everthying will be okay if we surrender to Him and trust in Him just as Martha surrendered everything to Him in verse 27, “Yes, Lord. I have come to believe that you are the Messiah, the Son of God, the one who is coming into the world.”

Deacon Bickerstaff is available to speak at your parish or event. Be sure to check out his Speaker Page to learn more. Into the Deep is a regular feature of the the Integrated Catholic Life™.