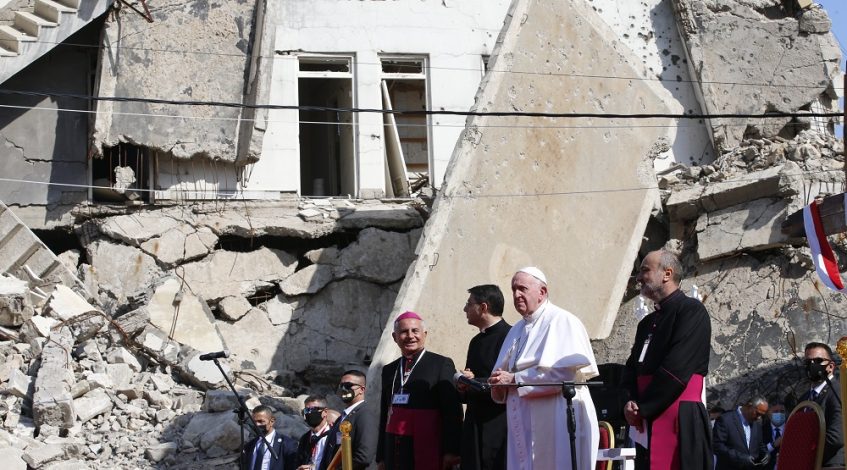 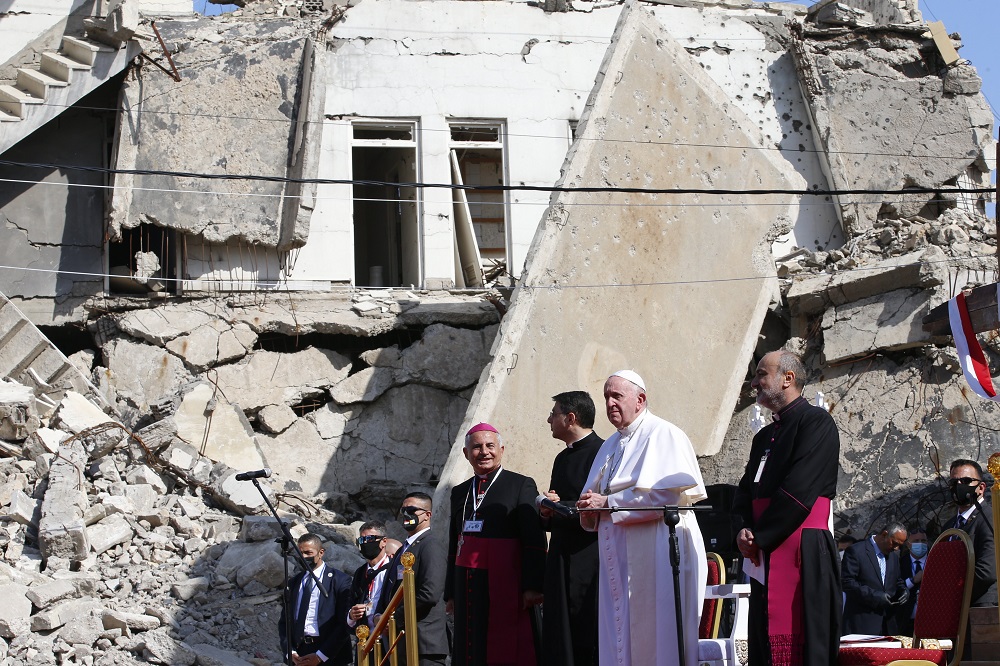 VATICAN CITY (CNS) — Being against war and for peace requires more than urgent appeals and treaties, according to Pope Francis. It requires a demanding, lifelong process that starts in the human heart and boldly expands outward into a broken world, he has said.

Waging peace requires such a particular mindset and set of values and skills that he often compares to a kind of craftsmanship that must be honed and humbly practiced every day.

A thorough rundown of what it takes to become a peacemaker is outlined in a recently released book in Italian, “Contro la Guerra. Il Coraggio di Costruire la Pace” (“Against War. The Courage to Build Peace”).

Pope Francis introduces the 192-page volume with fresh remarks penned March 29, criticizing the futility of war: “War is not the solution, war is madness, war is a monster, war is a cancer that feeds off itself, engulfing everything!”

But the main body of the book, published by Solferino press and the Vatican Publishing House, compiles the pope’s most outstanding commentaries on war and peace over his nine-year-long pontificate.

The brightest highlights taken from his many messages, documents, homilies and speeches all come together to form a comprehensive look at what it takes to build peace.

“Peace is not a document which gets signed and then filed away. Peace is built day by day! And peace is crafted; it is the work of our hands; it is built up by the way we live our lives,” Pope Francis told young people in Bangui, Central African Republic, in 2015.

In that speech and throughout the book, Pope Francis’ “artisanal path” of peace can be boiled down to five key features:

— Fraternity and seeing the world as one human family living in one common home.

The stars in the sky shine down on every single person — from the beginning of time to today — and learning “to look at the stars” will be “the most effective vaccine for a future of peace,” he said in Ur, Iraq, in 2021.

“Anyone with the courage to look at the stars, anyone who believes in God, has no enemies to fight. He or she has only one enemy to face, an enemy that stands at the door of the heart and knocks to enter. That enemy is hatred,” the pope said.

“There will be no peace as long as we see others as them and not us,” he said. Humanity lives under one heaven, under the gaze of one God who desires his children to be “hospitable and welcoming” to each other on earth.

— Inclusion, including reconciling with one’s enemies and embracing unity in diversity.

The pope told young people in the Central African Republic that the first step toward being a peacemaker was “never hate anyone. If someone wrongs you, seek to forgive.”

“We only win if we take the road of love,” he said, and, with love, “you will win the hardest battle in life” and find peace.

But “we need to pray in order to be resilient, to love and not to hate, to be peacemakers,” and “you must be courageous,” he added. “Courageous in love, in forgiveness, in building peace.”

— The difficult art of dialogue and listening, which can sometimes be as hard as building a bridge over an abyss.

Pride and arrogance must be eradicated from one’s own heart, he told young people at a congress of the educational project, “Scholas Occurrentes,” in 2016. “Our world needs to lower the level of aggression. It needs tenderness. It needs gentleness, it needs to listen, it needs to walk together.”

Dialogue is “the capacity to listen, not to argue immediately, to ask,” he said. “Everyone wins in dialogue; no one loses” because “it is about agreeing to proposals so as to move forward together.”

Dialogue is to put oneself in the other’s place, “to form a bridge” and “persuade with gentleness.”

— Peace is a constant journey of “getting one’s hands dirty,” concretely working for the common good.

“Our path leads us to immersing ourselves in situations and giving first place to those who suffer,” he said in Assisi for the World Day of Prayer for Peace in 2016.

Feeling responsible for helping others and refusing to be indifferent cleanses the heart and requires the “purification” and conversion that can only come from God, he said in Irbil, Iraq, in 2021.

“We need Jesus,” who conquers evil while he “strengthens us to resist the temptation to seek revenge.” Through the life-changing power of the Gospel, “the risen Lord makes us instruments of God’s mercy and peace, patient and courageous artisans of a new social order,” he said.

This new order must meet humanity’s desire for justice, equality and participation, he said in his World Day of Peace message in 2020. A democratic society recognizes everyone’s rights and one’s duties toward others, which can temper a harmful, unbridled understanding of freedom.

— For Christians, living the beatitudes is to bring heaven — and peace — to earth.

In his homily in Baghdad in 2021, the pope said, “We do not need to become occasional heroes, but to become witnesses, day after day,” embodying the wisdom and love of Jesus.

Jesus changed history “with the humble power of love, with his patient witness. This is what we are called to do,” he said, and “that is how the world is changed: not by power and might, but by the beatitudes.”

People who live the beatitudes “are helping God to fulfill his promises of peace,” he said. “This is the way; there is no other.”