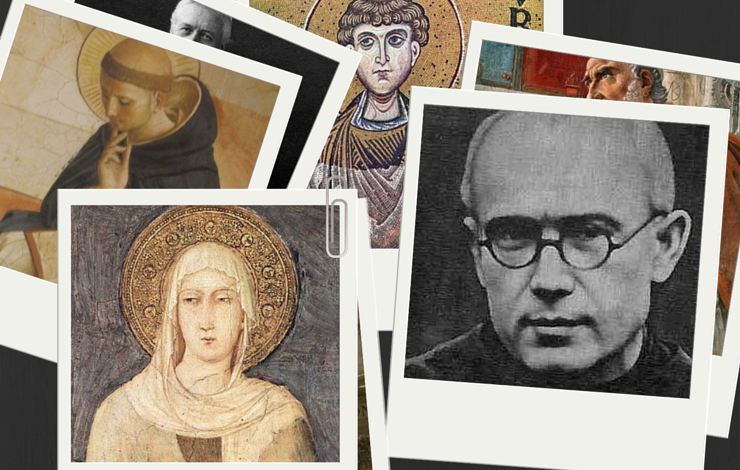 I love saint stories. I know I’m not alone – even the saints loved saint stories.  St. Ignatius of Loyola’s conversion was spurred by reading the life of Christ and the lives of the saints.  St. Teresa Benedicta of the Cross (Edith Stein) stayed up all night reading the life of St. Teresa of Avila.  There is an attraction in the radical witness of holiness that the lives of the saints provides us.

I love saint stories because some are off-the-wall, and some are perfectly normal.  Some of them are full of adventure and others are rather ordinary.  Some have been passed down orally for centuries and others are so recent we have photographic evidence.

I love saint stories because I need reminders that it’s possible to be holy. If someone as vain as St. Ignatius (who had the surgeon re-break his leg because it was healing with a bump that would show through his courtier tights) can be a saint, so can I.  If someone with a hot head and a biting pen like St. Jerome (who was known even to insult other saints) can be a saint, so can I.  If someone as broken and wounded as Blessed Bartolo Longo, a former Satanic priest, can be a saint, so can I! It’s not that we dismiss their character flaws or sins with a shrug and a “no one’s perfect!” It’s that they realized they were flawed and broken and asked God for help.  These men would be the first to tell us that they had remorse for their sins and did penance for their sins throughout their lives.

I love saint stories because I need encouragement that saints were ordinary people of varying personalities, races, temperaments, social standings, and ages.  There’s no cookie-cutter saint.  Sanctity isn’t just for the young (look at 86-year old St. Polycarp) or the old (check out the youth of St. Domenico Savio or Venerable Antonietta Meo).  It’s for extroverts (St. Teresa of Avila) and for introverts (St. John of the Cross).  It’s for the rich (St. Helena and Bl. PierGiorgio Frassati) and the poor (St. Alexis the Beggar).  It’s for people of the 21st century (Blessed Chiara Badano as much as it was for the apostles in the first.

I love saint stories because I need a cheering squad.  This Sunday’s second reading reminds us, “Since we are surrounded by so great a cloud of witnesses, let us rid ourselves of every burden and sin that clings to us and persevere in running the race that lies before us while keeping our eyes fixed on Jesus” (Hebrews 12:1).

Imagine running a hard race in silence, with no one there to encourage you, no one to cheer you on. Now imagine running in a packed stadium with everyone rooting for you. That’s how we run the race of this life. The bleachers are packed with a whole cast of characters. They’re all very different, but they have some things in common: they’re real people (not storybook characters) and even though they weren’t perfect in this life (except for our Blessed Mother up in that box seat), they finished the race and won.

Learn their stories— they’re your family history! The saints’ stories should be told around campfires and reminisced like the family stories they really are. We should be excited by the courage of St. Joan of Arc. We should be encouraged by the perseverance of St. Monica. We should be inspired by the heroism of St. Thomas More. There are certain stretches in the Church calendar which seem to be packed with some heavy-hitting feasts. August has some of my favorites – St. Clare and St Dominic, St. Pius X and St.  John Vianney, St. Lawrence and Pope St. Sixtus, and St. Maximilian Kolbe.

We should be provoked by the story of St. Maximilian Kolbe, who volunteered to take the place of a fellow prisoner at Auschwitz and died as a martyr of charity. He spent his priesthood spreading devotion to the Immaculate Conception through the most modern means available (magazines, newspapers, and radio), founded the largest friary in the world, and went to Japan to establish a printing press, seminary, and friary there as well. Maximilian continuously suffered from ill health, but did not let that slow down his evangelization efforts. He was called back to Poland from Japan and five years later was arrested by the Nazis. After intense suffering in the concentration camp, he volunteered to take the place of a husband and father who had been chosen at random to die in a starvation bunker. On August 14, 1941, the guards in the bunker injected him with carbolic acid and he received his martyr’s crown.

Two August feast days that are tied together are the feasts of Pope St. Sixtus II on August 7 and St. Lawrence on August 10.  The Romans love to tell the story that when Pope Sixtus was led to martyrdom, his deacon Lawrence protested, “Where are you going, my dear father, without your son? Where are you hurrying off to, holy priest, without your deacon? Before, you never mounted the altar of sacrifice without your servant, and now you wish to do it without me?” Sixtus reassured Lawrence that he would follow him in three days.  St. Lawrence, who was in charge of the treasury of the Church, spent those three days giving the riches to the poor.  When he was called in front of Emperor Valerian on the third day to turn over the riches of the Church, he brought the crippled, the lame, and the poor.  “These are the riches of the Church!” he declared.  Valerian didn’t appreciate that much, and sure enough, Lawrence followed his Holy Father in martyrdom, famously quipping to his executioners while being roasted, “Turn me over, I’m done on this side.”  While these stories, found in the writings of St. Ambrose, might be legends, I believe they’re an important part of our heritage and reminders of the humanity of the saints.

These are the stories on which we should raise our children. They’re the tales that get passed throughout a family, told around the campfire, and inspire us to greatness.  Celebrate these men and women! Find out when your feast day is – whether it’s your baptismal name, your confirmation name, the patron of your profession – and go to Mass and eat ice cream on that day.  Wish your family and friends happy feast on their feast days.

This is your heritage!  Celebrate them, be fortified by them, and be holy with them.