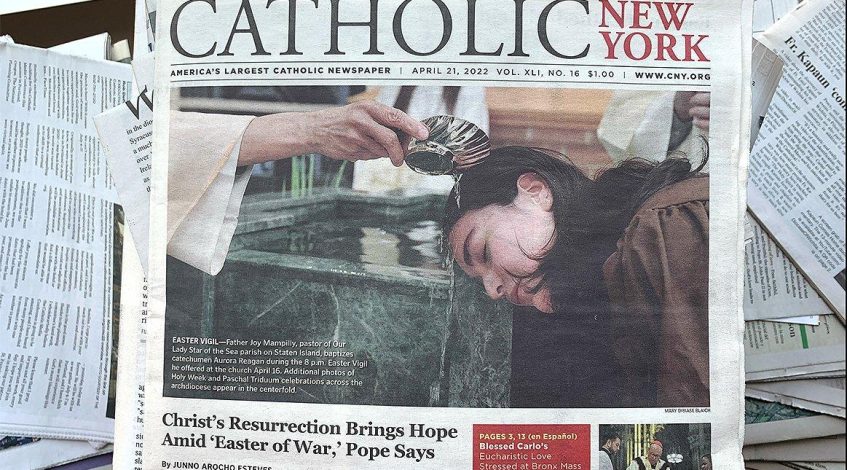 NEW YORK (CNS) — Catholic New York, the biweekly newspaper of the Archdiocese of New York, will publish its final issue Nov. 17, as the archdiocese moves toward unveiling a new digital communications program that will begin in late 2022 or early 2023.

All 13 employees of the newspaper will lose their jobs.

The news was announced publicly May 19 in a memo to archdiocesan employees, including those at the New York Catholic Center in Manhattan, the home base of Catholic New York since it was founded by Cardinal Terence J. Cooke in September 1981.

“We know that this is a painful decision for many, beginning with the excellent team who have dedicated themselves to producing an outstanding, award-winning periodical — one of the best, if not the best, Catholic newspapers in the country,” said Msgr. Joseph LaMorte, vicar general and moderator of the curia, and John P. Cahill, chancellor of the archdiocese.

“We will work with them during this period of transition and will help them find new positions in the archdiocese wherever possible.”

The entire staff of Catholic New York, including John Woods, the newspaper’s editor- in-chief, and Matt Schiller, the advertising/business manager, were offered “sincere and deep thanks” for their dedication to the archdiocese and to their work.

The closure will bring to an end one of the most successful and well-honored diocesan publishing operations. “I’m so proud of the commitment made by our staff to uphold the legacy of those who came before us, even as we dealt with a changing publishing environment,” Woods said.

“We have given our all to the mission of providing readers with important Catholic news, information and opinion that will help shape their lives and serve as a voice of unity for a diverse and sprawling archdiocese.

“Notwithstanding our deep disappointment with the decision, we’ll hold true to that credo until our final edition.”

The paper’s 88-page maiden issue Sept. 27, 1981, served notice that it was going to set a higher bar for the diocesan press. Reports on each of the archdiocese’s then-16 vicariates as well as a profile on New York City Mayor Edward I. Koch covered the first half of that issue.

In years to come, Catholic New York’s heyday as a weekly came during the 16-year tenure of Cardinal John J. O’Connor, a newsmaker nonpareil whose “From My Viewpoint” column was a must-read in New York’s Catholic community and beyond.

Early in his tenure as Archbishop of New York, one of the first decisions Cardinal Timothy M. Dolan made was to increase Catholic New York’s frequency to biweekly. His popular “To Whom Shall We Go” column is a benchmark for the publication, which rebounded with four consecutive first-place finishes in General Excellence in the Catholic Press Association competition, 2013-2016.

In September 2018, Catholic New York began publishing a monthly supplement called Católico de Nueva York to respond to the needs of the growing Hispanic population across the 10-county archdiocese. As a visible sign of the unity of the archdiocese, Cardinal Dolan requested that Católico be published inside the English-language edition.

Catholic New York still reaches more than 100,000 readers, a number that was higher before COVID-19 health protocols required the newspaper to lessen bulk drops of issues to parishes.

Msgr. LaMorte and Cahill, in their memo, said the decision to install the digital program would enable the archdiocese “to better compete in today’s media environment.”

The initiative, offered through the archdiocese’s marketing department, will combine video, articles, photography and social media in a fast-paced new format. They said it is seen as a way to reach “as broad an audience as possible.”

Woods said that in his paper and other diocesan news outlets, “a gaping hole will need to be filled when the CNS bureaus close.

“It is not just Catholic publications that stand to lose when this decision comes to fruition. The bishops in the United States will lose an important and consistent amplifier of their collective voice as well as the overall work” of the U.S. Conference of Catholic Bishops, he continued.

“Any of us can certainly think of many issues that will not be addressed as well as they were previously because CNS was on the story. I’m not saying there are no possible alternatives to CNS, but my experience and understanding say none are nearly as good or as thorough in their approach,” Woods added.