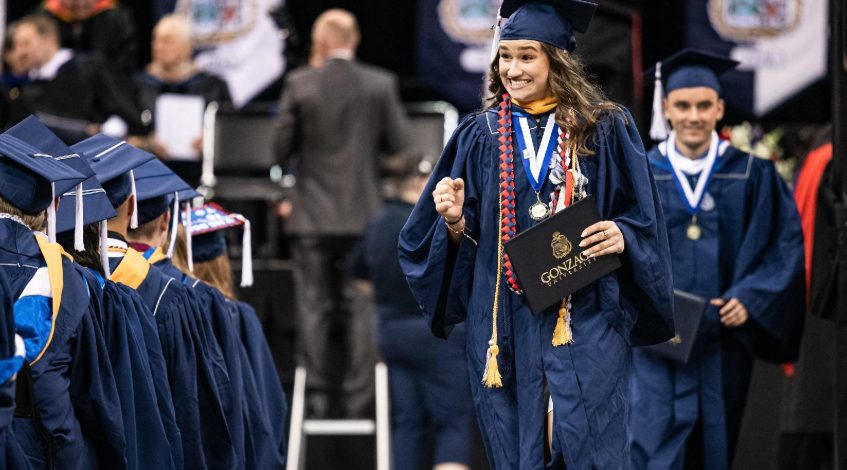 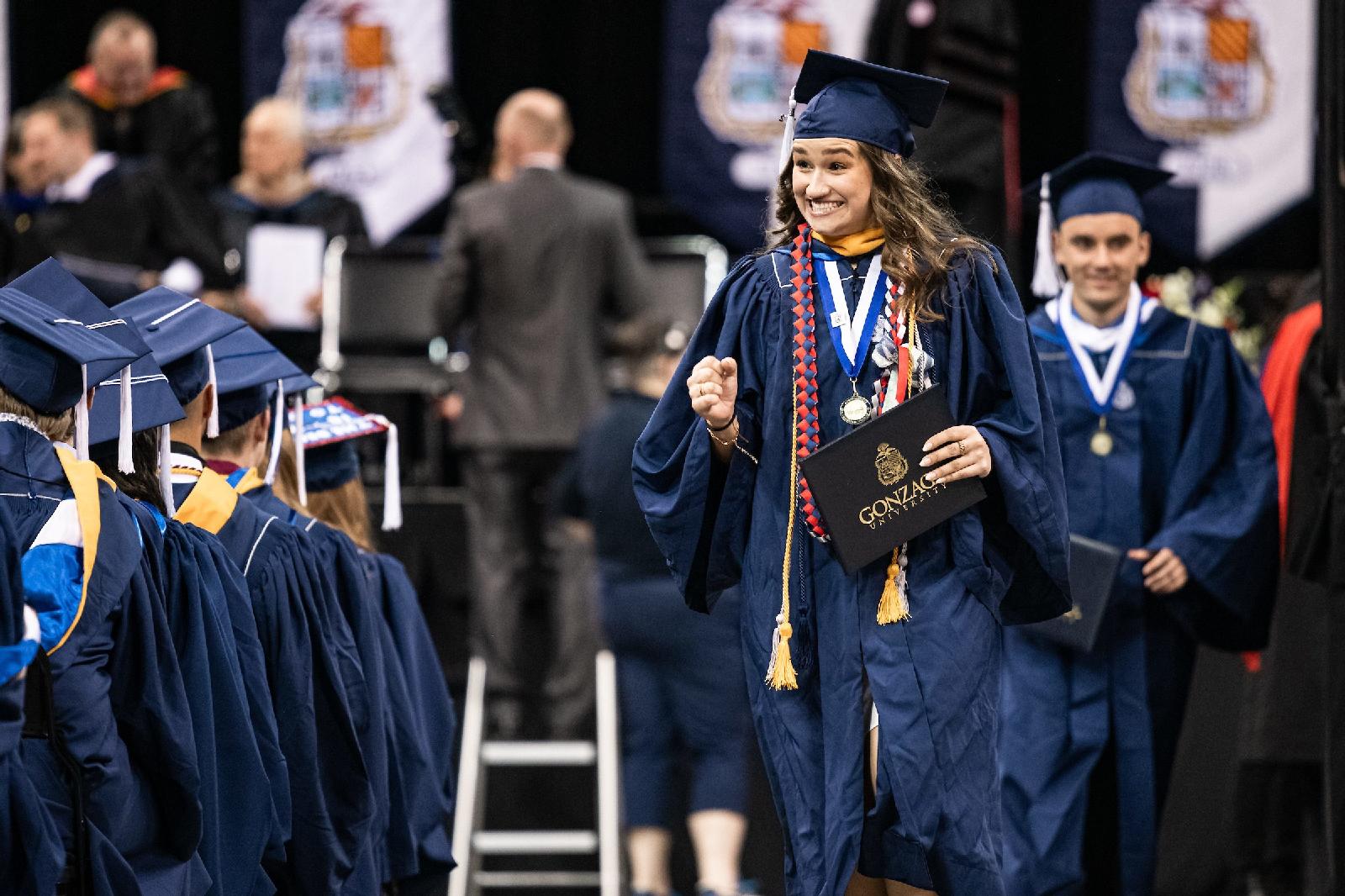 WASHINGTON (CNS) — At Catholic college and university graduation ceremonies across the country, speakers praised students for lessons learned during these past four years that had nothing to do with classes, projects or late-night study sessions, but instead with how they adapted to their workload during the coronavirus pandemic.

At Loyola University Chicago, Jo Ann Rooney, the president, told the class of 2022 May 14 that they had been forced to connect, learn and care for one another under deeply uncertain circumstances.

Similarly, Jesuit Father Daniel Hendrickson, president of Creighton University in Omaha, Nebraska, told graduates May 14 that the pandemic “likely challenged your academic journey, your spirit and resolve, and yet you refused to let it overwhelm you.”

“Really, you did not just overcome, but you rose to the occasion, and you are here today because of that singular determination,” he told graduates at the in-person graduation.

And at St. Michael’s College in Colchester, Vermont, Dan Misleh, founder of Catholic Climate Covenant, told graduates who marched into the May 15 ceremony in the rain that they had come unexpectedly through both the pandemic and this day’s storm demonstrating grit and promise for future perseverance.

A graduating senior at Loyola Chicago also pointed to the pandemic’s impact, saying it formed the current graduates.

“The pandemic amplified the call for all of us — educators, mental health professionals, researchers and scientists — to recognize and address social injustice in whatever form it takes,” Patricia Therese Valbuena, who was obtaining a degree from the university’s School of Education, said on the school’s website.

Several commencement ceremonies also highlighted other challenges in front of today’s graduates and emphasized they are prepared to face what lies ahead.

At the May 14 graduation ceremony at Christendom College in Front Royal, Virginia, Cardinal Robert Sarah, the former prefect of the Congregation for Divine Worship and the Sacraments, told students that their class had lived through an extraordinary time not only with the pandemic but a divisive national election and the ongoing threat of war in Europe.

He also noted an increased moral relativism and lack of recognition of God and urged graduates to turn to Mary and St. Joseph daily and rely upon them in the challenges ahead.

And at the May 14 graduation ceremony at Benedictine College in Atchison, Kansas, Auxiliary Bishop Robert E. Barron of Los Angeles emphasized the importance of prayer.

The bishop, who is founder of Word on Fire Catholic Ministries, told students he hoped their college experience “opened up the door of prayer and that this door never shuts your whole life long.”

“There is never a wrong time to pray. The cultivation of your relationship with the Lord must be the top priority of your life,” he continued. “Trust me when I tell you it will sustain you through the vicissitudes of life, through the mountains and valleys that I assure you will come but on this day you can barely sense.”

Bishop Barron received an honorary degree, as did other college graduation speakers.

Archbishop Borys Gudziak, head of the Ukrainian Catholic Archeparchy of Philadelphia, received an honorary degree at The Catholic University of America’s graduation ceremony May 14 in Washington and also received one the following day at commencement exercises for the University of Notre Dame in South Bend, Indiana, where he was the graduation speaker.

When he was announced at Notre Dame, more than 3,300 graduates rose and waved Ukrainian flags in a show of solidarity with a nation under siege.

Archbishop Gudziak, who also is the head of external relations for the worldwide Ukrainian Catholic Church, said the university “has offered a singular response to the Russian invasion and devastation of Ukraine.”

“My presence reflects your heartfelt solidarity. It is a sign of your capacity to love generously, to embrace, to serve and save the suffering, to bless the cursed and lift up the downtrodden and trampled,” he said.

The archbishop urged the graduates to truly live out their Notre Dame diploma by being aware of “people on all continents, of immigrants at our southern border and refugees throughout the world, of those in our towns and cities who do not have equal opportunities, to feel the pulse of the unborn, the disabled, the sick and the aged.”

In Washington at Catholic University May 14, Sebastien Lai received sustained applause from the crowd when he accepted an honorary degree on behalf of his father, Jimmy Lai, a prominent human rights advocate currently in prison in Hong Kong.

A Catholic and the pro-democracy founder of Next Digital and Apple Daily newspaper, Jimmy Lai has been arrested several times and imprisoned since April 2021.

The graduation was the final one for outgoing Catholic University president John Garvey, who told the graduates: “Congratulations all of you. It’s been wonderful to be here with you.”

As the university’s students processed in, one parent said something that no doubt echoed what many graduates’ parents were feeling. “I am so grateful that everyone gets to be together — outside — after all this class has been through,” said Ann Turgeon, watching for her son Will, who was receiving a degree in business management.

“I feel a lot of pride and thankfulness,” she told a school representative.