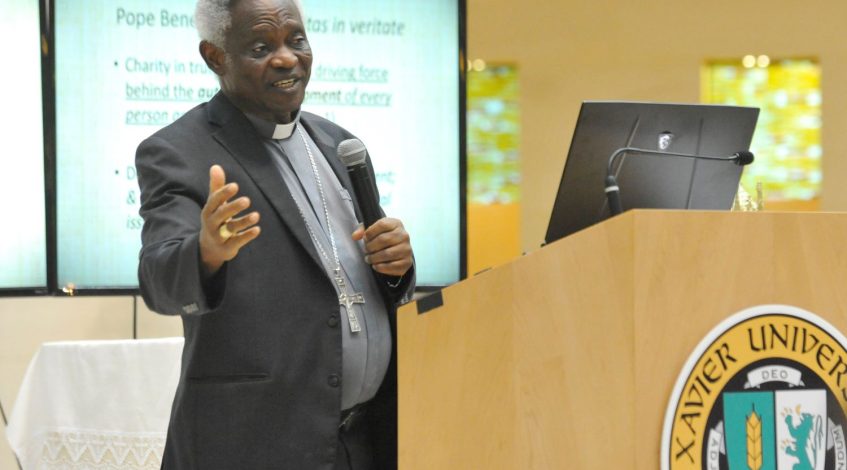 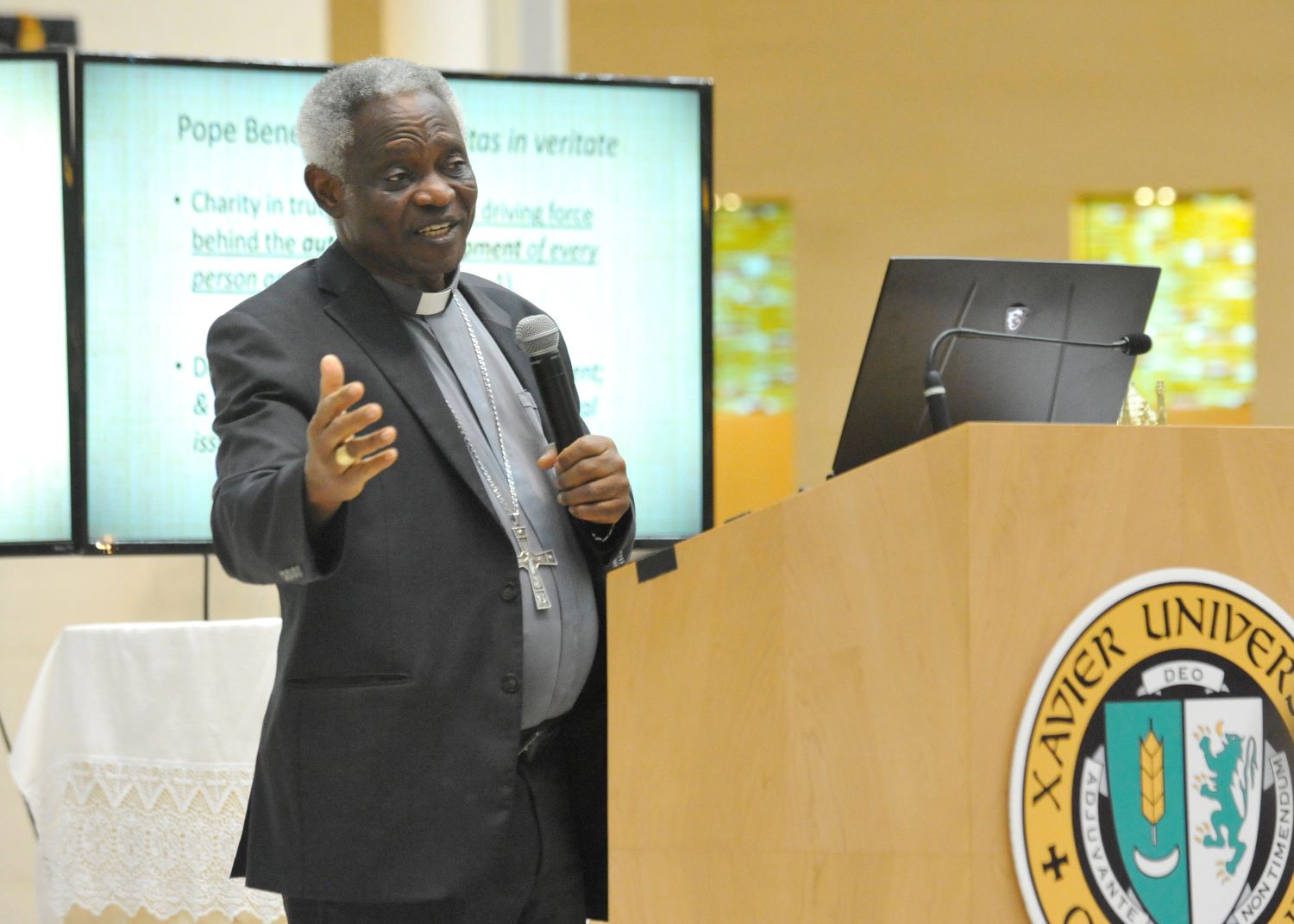 Cardinal Peter Turkson, the former prefect of the Vatican’s Dicastery for Promoting Integral Human Development, told a New Orleans symposium that the Catholic Church encourages CEOs and other business leaders to embrace the notion of their being “co-creators” with God.

Those in business have a special “vocation” in ensuring that their products and services contribute to the common good, both of their workers and of society, he said.

“I would say CEOs and other business leaders do have a vocation,” Cardinal Turkson told attendees during “The Catholic Business Leader: A New Orleans Symposium,” held Sept. 29-Oct. 1 at Xavier University of Louisiana and Loyola University New Orleans.

“We’re not asking you to be a priest or a nun, OK? We are just inviting you to consider the implications of what you do,” he said.

Cardinal Turkson, who also served as president of the Vatican’s Pontifical Council for Justice and Peace from 2009 to 2017, examined the document “Vocation of the Business Leader: A Reflection.”

That document was written in 2011 during the pontificate of Pope Benedict XVI by what was called the Pontifical Council for Justice and Peace.

It was updated in 2018 to incorporate teachings from Pope Francis in “Laudato Si’” on the vocation of business, the crucial importance of protecting the environment, the error of viewing persons as “mind-body” machines and a more just distribution of wealth.

“When we refer to it as a vocation, it just means it doesn’t derive only from ourselves, but we see how our activity or whatever we do also fits into God’s program,” Cardinal Turkson said.

“We are inviting people to be transcendent and go beyond themselves, to see meaning in what they do and how it fits into God’s plan, especially when the individuals are Christians,” he added.

Cardinal Turkson said the church is not naive about the pressures facing business today through increased competition, globalization, the pandemic and “the climate crisis.”

“All of these are tough situations, and you need to maneuver through all of this,” Cardinal Turkson said. “That means discerning and making decisions.”

“‘Seeing’ means looking at your situation and seeing how to maneuver in such a way that would represent the integrity of your faith,” Cardinal Turkson said, warning business leaders about living a “divided life” that separates business activities and faith. “You ‘judge’ in such a way that there is coherence and consistency between what you believe and what you’re going to do.”

“As Pope Francis would say, business is a noble vocation,” the prelate said. “We understand that what you do has sense not only for yourself but also for God and his plan. That means that you are co-creators with God.”

He used a simple analogy to explain “co-creation.”

“We sit on furniture,” he said. “Before this became furniture, this was made of wood. God created trees. God did not create furniture. It takes business to convert the wood of creation into furniture for the concrete use of humanity.

“That’s how people continue God’s work of creation. We do not point accusing fingers at business. That is something from the past.”

Cardinal Turkson asked the business leaders attending the conference to “imitate God’s gifts” by “being gratuitous in the exercise of (their) own business.”

“The gratuitousness in this is present in the charity of Christ,” he said. “As Pope Benedict says, charity is the key. It cannot all be about gain and maximizing profits, because there is a crucial component of charity that reflects our relationship with God. Everything we receive as God’s gift is a gift, so, therefore, why don’t we imitate that?”

While he was in New Orleans, he visited with the Sisters of the Holy Family, the congregation of African American religious women founded in 1842 by Venerable Henriette Delille. Mother Henriette’s beatification cause is being examined by the Vatican Dicastery for the Causes of Saints.

The symposium was a joint effort of Xavier and Loyola universities. It was a chance to shine a spotlight on the business leader as having a vocation beyond maximizing profits, said Jose Bautista, the J.P. Morgan Chase professor of economics at Xavier.

“The cardinal has the ability to draw people to this work and then encourage business executives to practice their faith as business executives,” Bautista said. “Operating a business should no longer be a secular activity — it should become a vocation.”

After the document was published, Cardinal Turkson held face-to-face meetings with CEOs of mining and energy companies and with banking executives through UNIAPAC, a Paris-based, ecumenical organization whose membership includes business executives from 40 countries in Europe, Latin America, Africa and Asia.

“Our attempt is simply to carry the church’s message to all these companies,” Cardinal Turkson said. “It’s not to say they’ve never heard the Gospel. That’s not the point.”

“We do have a tool as the Catholic Church called the social teachings of the church,” he said. “We know clearly that faith without works is dead. To connect our faith with work means that we engage the society to make our faith have an impact.”

Finney is executive editor/general manager of the Clarion Herald, newspaper of the Archdiocese of New Orleans.