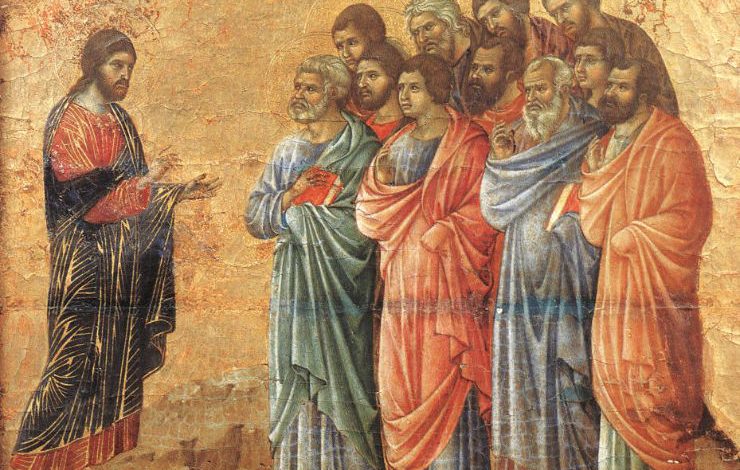 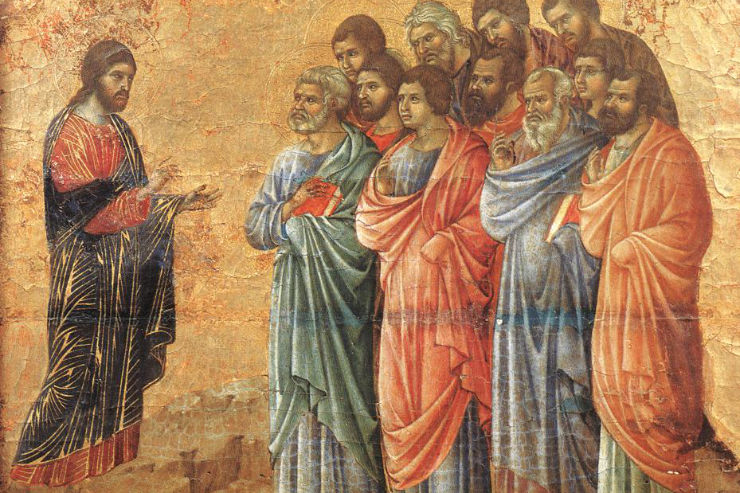 Image: “the appearance of Christ on the mountain in Galilee” (detail) by Duccio Di Buoninsegna | Public Domain via Wikimedia Commons

It may be tempting to skim through the story in today ‘ s Gospel of the Apostles. If you read The daily readings as part of your morning prayer routine, you may gloss over the story in its familiarity. If you are able to go to daily Mass, you may begin to hear the passage from Mark’s Gospel, recognize what’s about to happen, and then gently allow your brain to wander elsewhere while Father reads the list of names.

But let’s look a little closer at this passage from Mark’s third chapter. Yes, it is the Call of the Apostles. Yes, he is choosing twelve of his closest followers whom he will eventually ordain leaders of his Church. He will give them his own authority to go out and preach and work miracles. But let’s look more closely at what he’s appointing them to do:

” He appointed twelve [whom he also named apostles] that they might be with him and he might send them forth to preach  » (Mark 3:14).

Since the word « apostle » comes from the Greek apostellō, or « send, » we tend to focus on the idea that they were sent out, glossing over that first part: that they might be with him.

While this verse does not necessarily directly apply to most of you reading this post right now, whom I assume are mostly laity – Jesus is instituting an office that extends his public ministry through the sacramental life of the Church – there is something we can – and should – take from this.

Jesus is not simply picking his future leaders to commission them to go out. He is not only sending them to work. Rather, he is choosing them to be with him. In the public ministry of Christ, we see the Apostles being sent two by two, but most of the time they are accompanying him, watching him, listening to him, and questioning him.  After his resurrection, they spend forty days with him. Acts of the Apostles do not tell us much about these days, but it was definitely a time of final instruction and preparation. Just as Jesus spent forty days in the desert before his public ministry, the eleven spend forty days preparing for the great task they are about to undertake: the Great Commission.

But even after Jesus ascends to the Father, there is still the call and responsibility to  » be with him.” How is this possible? We see a hint in the story of the road to Emmaus, when the disciples beg him, “Stay with us, for it is nearly evening and the day is almost over” (Luke 24: 29). He shows them how he will stay with them always: in the miracle of the Eucharist.

In the end, he tells them: “and behold, I am with you always, until the end of the age” (Mt 28:20). An interesting way to say goodbye, no? Unless you were planning on staying. And he does. While his physical body is in heaven, we can still be with him here on earth.

Not one or the other

As baptised Christians, we are too late. And perhaps it’s easier to concentrate on this side of the calling. We can get busy “doing”. We can volunteer at our parish, we can teach our kids, we can constantly question God, “what do you want me to do? » do?”

But what about the other half? Being with him?

I don’t know about you, but some days seem easier to “be late” than it is to be with Him. I can’t wait to answer my call. It’s easy to forget that there’s another part to that call: to be with him. To sit in silence, or practice mental prayer, or open the Scriptures and ask the Holy Spirit to speak. Is that vulnerability, that solitude, a little scary?

Or perhaps you are more scared of being late. Maybe you would rather pray all day and sit with spiritual reading and fill your brain and your heart with his Word. Perhaps you need to be reminded of the “Being Late” side of the call. Is he giving you the love for Scripture and the knowledge of him simply for yourself, or are you being called to share it in some way?

Today, he is calling you… that you might be with him and he might send you forth. How will you respond?