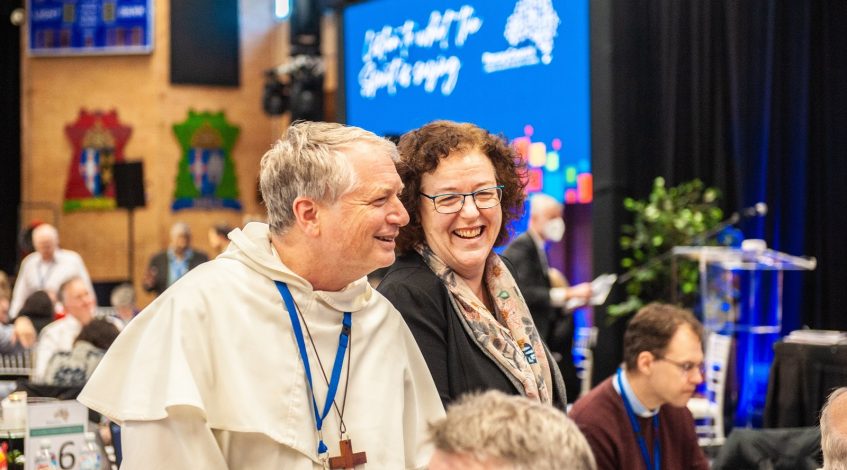 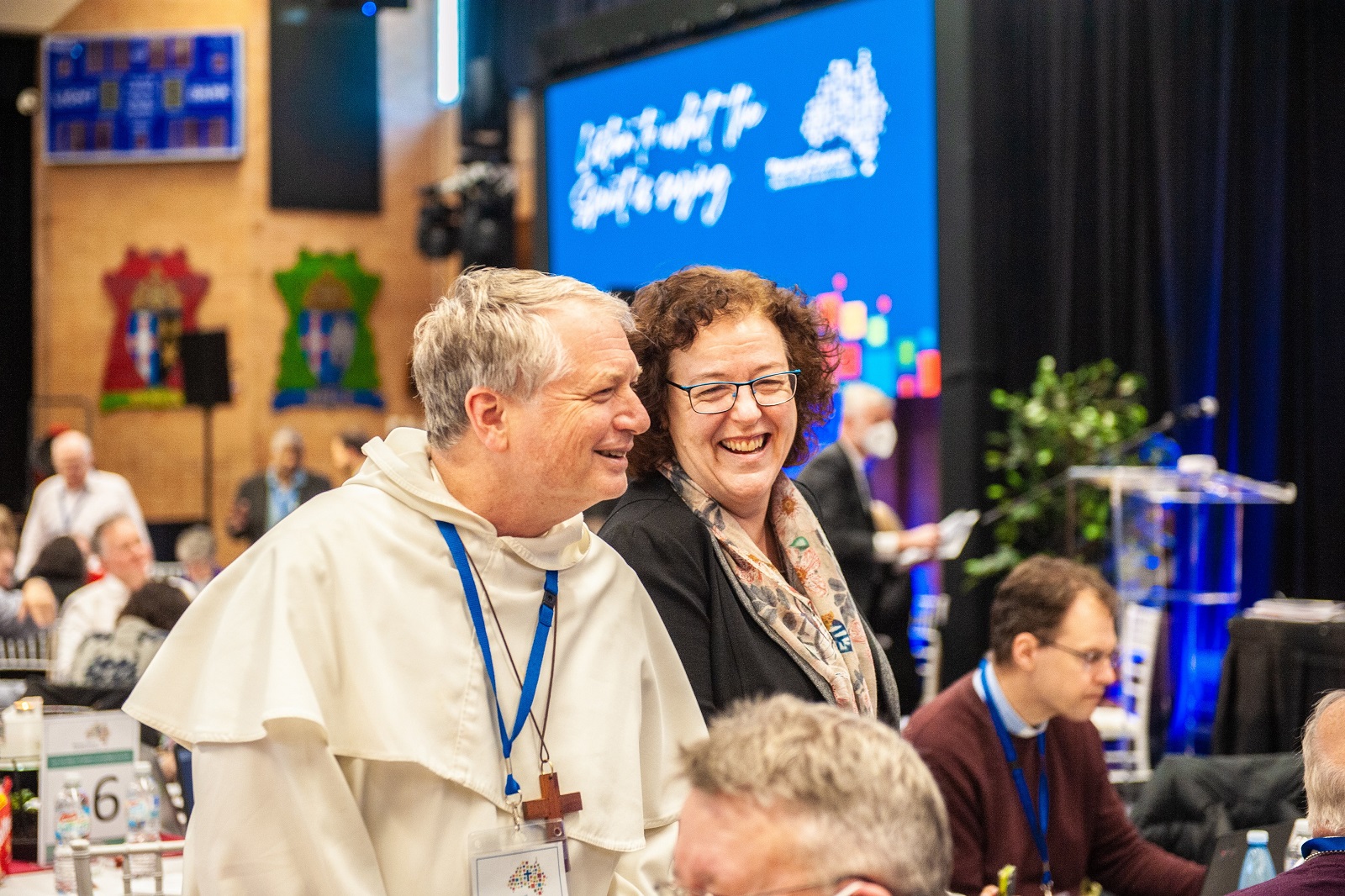 SYDNEY (CNS) — The Second Assembly of Australia’s Plenary Council prepared to close July 8 after two days of catching up and passing almost all of the motions in its guiding document including a revised version of the section on the equal dignity of women and men in the Catholic Church.

Members were noticeably tired after a long week, but the general mood in the assembly hall was buoyant as the final full day ended.

Francine Pirola, co-director of the Sydney-based Marriage Resource Center, said the council had produced a “vastly improved” revision of the section of the document on women, which had been the focus of a major disruption July 6.

“Instead of being comprised of only two motions, all of the action items were separated out, so that was really good and felt a lot more respectful,” she said.

“The document was theologically more concise and accurate as well, so I think that made it easier for people to swing behind it,” she said. “Mostly the women who had previously been very distressed seemed to be happy with it.”

The council agenda was disrupted after more than 60 of the 277 council members staged a protest over issues regarding women in the church, including the defeat of a motion to formalize support for the ordination of women as deacons.

Erin Gillard, a parishioner from Oran Park, said during a news briefing July 8 that the revision by a four-member committee was a better reflection of the experience of women broadly in the church.

“Wherever they find themselves on the spectrum of what it is to be a Catholic woman, we’ve found a midpoint,” Gillard said.

“It was an opportunity for a foundation and a starting point. I feel like I can go home to my daughter now and say yes, the Catholic Church values women and men, and it is a good day in that respect,” she said.

Canossian Sister Melissa Dwyer, who served on the committee with Renee Kohler-Ryan, national head of the School of Philosophy and Theology at the University of Notre Dame Australia, said she was pleased that both women also were part of the original drafting process.

“So I’m confident that it’s a document that really honors the spirit in the room,” Sister Dwyer told The Catholic Weekly, newspaper of the Archdiocese of Sydney.

“At the same time, I’m also confident that we’ve taken into consideration the original inspiration that came from those thousands of people that have been part in this journey all the way from the beginning of the different phases of listening and discernment,” she said.

Kohler-Ryan said the greatest challenge and responsibility was trying to fully consider the diverse views expressed in discussions and written feedback.

“The wisdom of Christ’s church, her Scripture and tradition, shines a path that actually places demands on all of us,” Kohler-Ryan said.

“Catholics are still to realize the ‘hour of woman’ that Paul VI spoke about at the close of the Second Vatican Council,” she said. “As the drafting team has expressed, there is still much work to be done.”

Following an emergency meeting of the bishops and the council’s steering committee July 6, council members agreed to change to a more flexible format allowing for greater discussion and consideration of the issues presented in the plenary meeting’s guiding document.

Eighteen of the 19 motions considered July 8 passed including all five motions in the section titled “Witnessing to the Equal Dignity of Women and Men.”

Earlier in the week, two motions in that section received simple majorities, but not the necessary two-thirds approval to achieve a qualified majority from the bishops, and so did not pass.

Archbishop Timothy Costelloe of Perth, Plenary Council president, addressed the assembly at the time, acknowledging it was a challenging moment for the body.

“There is a long way for the church to go in the understanding of the proper role of women in the life of the church,” said Archbishop Costelloe, who also is president of the Australian Catholic Bishops’ Conference.

“The way we move forward to properly understand God’s plan in relation to women is important. As the people of God, we should understand that this moment is one of the calls of God to us,” he said.

“It is clear from the Plenary Council journey that the church, the people of God, is committed to understanding the proper role of women,” he said.

Council members also passed a series of motions in sections titled “Communion in Grace: Sacrament to the World,” and “Formation and Leadership for Mission and Ministry.”

Among the motions were those about the sacrament of reconciliation, review of the ministry of preaching and the development of vocation formation programs.

They include a request the council will make that Pope Francis consider whether the third rite of reconciliation “might have wider use on occasions when it is particularly appropriate, granted an understanding among the faithful of its distinctive nature and requirements.”

The third rite can be used in circumstances when there is no opportunity for individual confession, allowing a presiding priest to give general absolution.

The motion that did not pass was a council request for an amendment to canon law to permit laypeople to preach at Mass.

Council delegates July 7 passed all six motions they considered in the areas of church governance and ecology.

On integral ecology, the council formally recognized both the sacred duty to care for and protect the Earth and to affirm the promotion and defense of human life from conception to natural death.

Included in the area of church governance was a call for the establishment of diocesan pastoral councils across the country, the hosting of diocesan synods within five years of the conclusion of the Plenary Council, and the undertaking of broad consultation about the creation of a national synodal body for church collaboration.

Selina Hasham, CEO of Harvest Journeys, a pilgrimage tour operator, said there was “undeniable grace present” throughout the week’s conversations and voting deliberations.

“We were 277 in number, imperfect people, bishops, clergy, men and women, enacting an imperfect process, but through that great frailty I think the Holy Spirit was able to work,” she said.

“People with many divergent views and myriad expressions of the way they live church, but with faithfulness nonetheless, and that allowed God to work and let us reach a resolution, particularly on the women’s issue. I think everyone was happily surprised that we journeyed through the chaos (July 6) and were able to emerge and find a way forward, so it was really good outcome.”

The council was set to close July 9 with a Mass at St. Mary’s Cathedral in Sydney.

The Plenary Council process began more than four years ago. A Plenary Council is somewhat like a national synod, but it can issue decrees that, once approved by the Vatican, are binding on the church in that country.