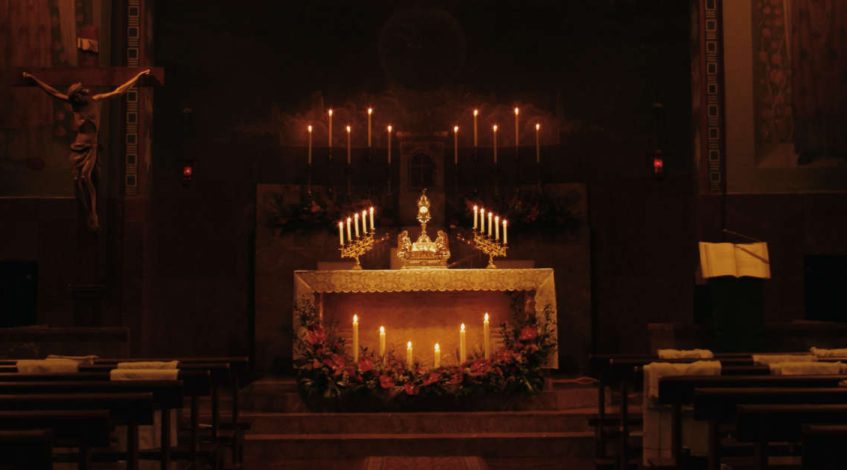 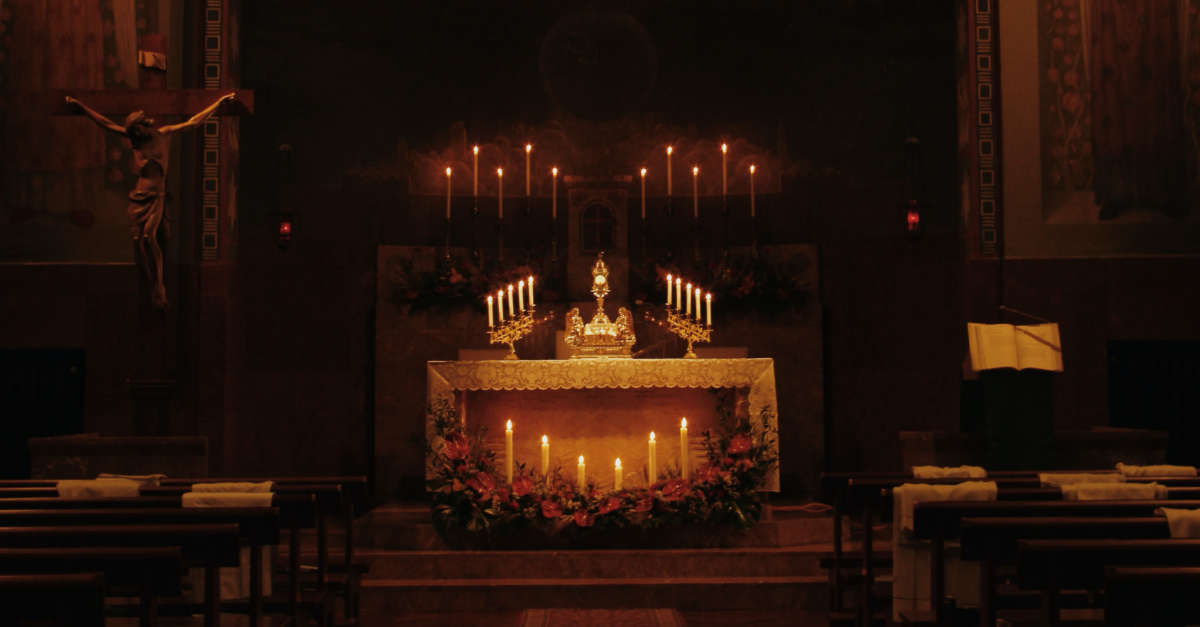 The United States is blessed with many extraordinary Eucharistic shrines that can be fitting places of pilgrimage during the three-year national Eucharistic Revival just begun.

I’ve had the privilege to visit some of them, like the Shrine of the Most Blessed Sacrament in Hanceville, Alabama, St. Clement’s Eucharistic Shrine in Boston, the Church of St. Jean Baptiste in New York City, and the National Shrine of St. Maximilian Kolbe at Marytown north of Chicago, to name a few of the most renowned.

Editor’s Note: This article from Fr. Landry originally appeared in The Anchor, the weekly newspaper of the Diocese of Fall River, Mass, on August 19, 2022 and appears here with the kind permission of the author.

Every active tabernacle, however, in each of the more than 16,679 Catholic parishes in the United States ought to be a place of regular pilgrimage during the Revival. Jesus Christ, really, truly, and substantially awaits us there, wanting us to bring him our prayers and grow in his holy likeness.

Out of all the important domestic Eucharistic destinations, one is, for me, in a class of itself, because of the Eucharistic saints who have hallowed it.

It’s the Shrine of Our Lady of the Martyrs in Auriesville, New York, where in the 1640s Saints Isaac Jogues, Rene Goupil and Jean Lalande all gave their lives out of a desire to bring to the Native Americans in Canada and upstate New York the Eucharistic love of the One who gave his life for us.

It’s also where, a decade after they sanctified the soil by pouring out their own blood in union with Christ’s, the “Lily of the Mohawks” was born, St. Kateri Tekakwitha, who would become one of the great witnesses to Eucharistic adoration in the Church’s history.

It’s a place not just to reflect on the gift of the Holy Eucharist, but on our response to that gift.

St. Isaac Jogues, born in France, desired to be a Jesuit, priest, and missionary, in order not just to bring the Gospel of Jesus to the New World but Jesus himself in the Blessed Sacrament. His priestly ordination was accelerated so that he would be able to join a group of Jesuits leaving in 1636 for New France. He loved Jesus in the Blessed Sacrament and was accustomed in seminary not only to attending Mass every day but to spending long vigils in prayer before the tabernacle. He well knew that as a missionary, traveling by canoe for days, with limited supplies of unleavened bread and wine, there would likely be times when he would not have access to the altar or tabernacle, but he longed to be able to found new chapels, altars, and tabernacles so that many others who did not know yet the ongoing reality of Christ’s incarnation might come to realize that God is with them, too.

After six years as a missionary, he was captured by the Mohawks close to Three Rivers in Quebec. He would soon realize just how much he would suffer without God in order to try to bring him to the very ones who were depriving him. With Rene Goupil and their Huron guides and companions, St. Isaac was brought down rivers, lakes and land to the village of Ossernenon, modern Aurieville, on the northern lip of the Mohawk River. Among the tortures St. Isaac needed to endure was to have his thumbs and index fingers severely mutilated, which meant that even if he had the liberty to celebrate Mass, he would no longer be able to, because according to the rubrics at the time, the priest had to hold the consecrated host exclusively with those severed digits.

This man of the Eucharist ended up going 17 months without even being able to receive the Eucharist, until, with the help of the Dutch, he was able to escape through modern day Albany, Manhattan, and England to arrive in France on Christmas Day 1643. As soon as he disembarked and had asked directions to the closest Church, he went to confession, attended Mass and received Holy Communion. “It was then,” he said, “that I began to live again and tasted the sweetness of my deliverance.”

He eventually was able to get to the Jesuit seminary in Rennes, where his confrères were well aware from the Jesuit Relations of his captivity. When, not recognizing him, the rector asked impatiently if their visitor had news of Father Jogues, he replied with an appreciative smile, “He is at liberty and is the one speaking to you.”

Through the help and insistence of the Jesuit Provincial and the Queen of France, he petitioned Pope Urban VIII for a dispensation from the rubrics so that he would be able to celebrate Mass with the hands and fingers he still had. Pope Urban VIII, most famous for adorning the altar of St. Peter with its famous bronze Baldachin, beautifully replied through the Jesuit General and French Ambassador, “Indignum esset Christi martyrem Christi non bibere sanguinem.” “It would be unworthy that a martyr of Christ not drink Christ’s blood.” Finally, in March 1644, after 20 months, he was able to go up to the altar of God, hold Christ in his mangled hands, and receive Christ’s Precious Body and Blood.

Despite the tortures he had endured, he wished to return to the missionary fields. His wish was granted. In 1646, he was asked by the French territorial government to lead a diplomatic mission to Ossernenon. Along the way, he traveled on a lake on which no European had yet traversed. He named it, fittingly, Lac du Saint Sacrement, not only out of love for the Blessed Sacrament but because it was the vigil of Corpus Christi; that remained its name for 109 years, before the English renamed it after King George II. Because of the protection of the French, he was able to minister to those whom he had previously baptized and formed during his captivity. As he was leaving, anticipating his return, he left a “Mass kit,” containing everything he needed for Mass, so that he wouldn’t have to transport one the next time. That would prove his earthly undoing.

The Mohawks caught an influenza a few months later and they superstitiously blamed it on the black box the priest had left behind. When Fr. Jogues soon thereafter returned with Jean Lalande, the Mohawks were poised for attack, and both were tomahawked, respectively, on successive days. He died, we could say, out of preparation for Mass, symbolized by his Mass kit.

Feet from where he died, St. Kateri was born ten years later, of a Christian Algonquin mom and a Mohawk dad, both of whom died of smallpox when she was four. When she was 19, she had a chance to talk to the recently arrived Jesuit Father Jacques de Lamberville, telling him she wanted to learn more about prayer and be baptized. “Who can tell me what is most pleasing to God that I may do it?,” she asked. After he tested her resolve, she was baptized the following Easter, and grew quickly in faith.

Her Christian life was such a sign of contradiction to her fellow Mohawks that Father de Lamberville, to save her life, arranged for her escape to the Jesuit village of Caughnawaga, 200 miles north, just south of Montreal. There she made her first Holy Communion on Christmas 1677.

From that point forward she lived a thoroughly Eucharistic life, adoring Jesus outside the locked chapel — on her knees, despite snow, ice and freezing cold —for an hour until it opened at 5 am, attending Mass and adoring Jesus inside until it was time for work and acts of charity, and returning after work for several more hours of adoration. When she traveled outside the village for the hunting season, she prayed in spiritual communion and adoration before a crucifix she would place in a tree.

She died on the cusp of Holy Thursday in 1680, at the age of 24. Her final words were a summary of her brief but profound Eucharistic faith and life: “Jesus, I love you.”

The Shrine of Our Lady of the Martyrs, with its three tabernacles, is a unique place of Eucharistic Revival. There one can learn, through the example and intercession of Saints Isaac and Kateri, how to “live again,” to “taste the sweetness” of what Christ has won for us, and to love him by doing “what is most pleasing to him,” what he told us on Holy Thursday to do in his memory.