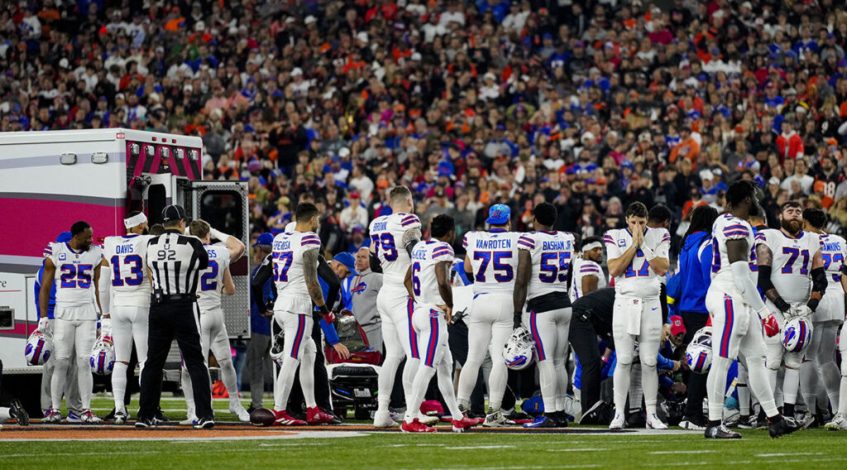 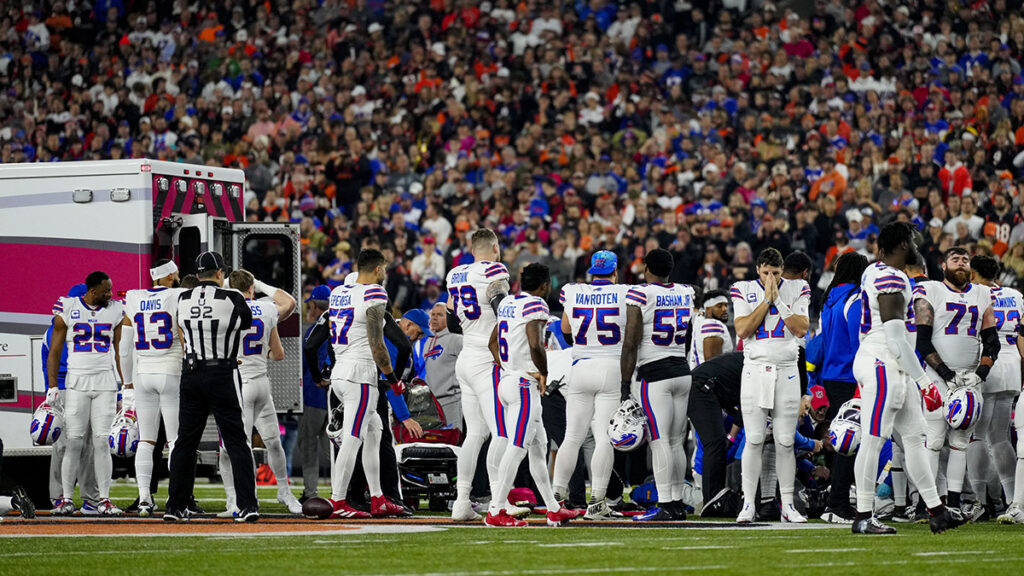 (OSV News) — The Central Catholic High School community in Pittsburgh is joining in prayer for NFL player Damar Hamlin, a 2016 school graduate, who was critically injured during a Jan. 2 game between the Buffalo Bills and the Cincinnati Bengals.

Hamlin, a safety for the Bills, collapsed after tackling Bengals receiver Tee Higgins during a routine play. According to a statement by the Buffalo Bills, the 24-year-old safety suffered a cardiac arrest following the hit.

Medics worked for nearly 10 minutes to restore his heartbeat as Bills team and staff members knelt in a tight prayer circle around Hamlin. Hamlin was then transferred to the University of Cincinnati Medical Center, where he remains in critical condition. Players, staff and commentators were visibly shaken by the incident, and the game – the last Monday Night Football match of the regular season – was suspended.

The NFL has posted an image of Hamlin’s team number with the words “Pray for Damar” across its social media accounts.

The Hamlin family released a statement online Jan. 3 asking supporters to “please keep Damar in your prayers,” noting they were “deeply moved by the prayers, kind words and donations from fans around the country.”

In a Jan. 3 statement sent to OSV News, Central Catholic called Hamlin a “highly respected young man” who “has been an integral part of our Catholic Lasallian Community and regularly returns to Central to speak with participants of our football campus.”

A photograph provided by the school to OSV News showed Hamlin in his high school football uniform holding a poster that read, “Recruited by Jesus.”

Central Catholic president Christian Brother Mike Andrejko asked in the statement that “the Lord be with (Hamlin) and hold him in the palm of his hand.”

The school’s recently retired head football coach Terry Totten described Hamlin in the statement as “a great athlete and a great Christian gentleman who is a man for others,” one who is “an essential part of the community at Central Catholic.”

Totten also pointed to Hamlin’s “unparalleled” work in the Pittsburgh community through the athlete’s charitable foundation, The Chasing M’s Foundation Community Toy Drive, which he started just before his selection in the sixth round of the 2021 NFL draft.

On its Facebook page, Central Catholic posted a message stating its community “is praying for the well-being and swift recovery” of Hamlin, adding: “May the Lord be with him and his family during this most difficult time.”

As of Jan. 3, the post had garnered some 2,500 shares and almost 400 responses, which included a number of heartfelt prayers.

“We humbly pray to Thee, Dear God, in Jesus’ Name, to heal Damar Hamlin,” wrote Miran Liza Mientus. “And please, Dear God, provide comfort for his dear Parents and Family, the Bills, the Bengals, and All who love him. How beautiful to see countless people come together in prayer for him.”

Amy Smyth Miller posted the text of the Memorare prayer to Mary, while others invoked the intercession of St. John the Baptist, St. Jude, St. Sebastian, Blessed Francis Xavier Seelos and the late Pope Benedict XVI.

One poster added a link to an undated video of Hamlin recorded during his high school years for the Pittsburgh Steelers Youth Football Show. As part of the interview, Hamlin shared that he had chosen the player number three because it was a “family number,” one his own father had worn.

Hamlin’s Twitter timeline over the past two years includes multiple expressions of faith and gratitude, along with support for friends and fellow athletes.

A post from the previous month read “from losses to lessons to blessings. Thank you, God!”

Gina Christian is a National Reporter for OSV News.